Institute of Noetic Sciences Sizes Up Its “Dan Brown Bump”

The Institute of Noetic Sciences reported across-the-board increase in all things noetics research since the release of Dan Brown's novel, The Lost Symbol in which the little known frontier science is a central theme. The Institute reported that website traffic is up by 1200 percent; book sales increase three-fold; and memberships spike three-fold 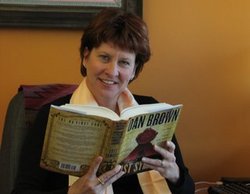 Dr. Marilyn Schlitz, CEO of the Institute of Noetic Sciences

could get the kind of public relations bump that Mr. Brown gave to the Holy Grail.

It has been a month since the release of Dan Brown’s record-breaking novel The Lost Symbol, in which the lead female character suggests noetic science “could get the kind of public relations bump that Mr. Brown gave to the Holy Grail.” It turns out, the bump is more like an earthquake. The Institute of Noetic Sciences reported across-the-board increase in all things noetic.

Website traffic (weekly visits) at the Institute of Noetic Sciences (IONS) have increased 1200 percent. In the period since the book was released, membership sign-ups increased 300 percent compared to the same period last year, and sales of books by Dr. Schlitz and IONS’ director of research Dean Radin have tripled since the Brown book launched September 14.

National Public Radio this week interviewed Marilyn Mandala Schlitz, Ph.D., CEO of IONS, a leading organization employing evidence-based scientific rigor to explore phenomena that have been largely overlooked by mainstream science, such as healing, mind over matter, and consciousness transformation. Dr. Schlitz and the Institute of Noetic Sciences will be featured in specials airing on Dateline NBC October 15 and Discovery Channel later this month.

The Institute of Noetic Sciences has 11,500 members in almost every state and more than 60 counties. It enjoys the support of more than 200 community groups in 39 states and 16 countries; communities in the Americas, Africa, Europe, and Asia, meet on a regular basis to sponsor lectures, conferences, and experiential events in their respective locales.

Dr. Schlitz's book, Living Deeply, The Art and Science of Transformation in Everyday Life, co-authored by Cassandra Vieten Ph.D. and Tina Amorok Psy.D, explores decades-long research into the power and potential of human consciousness and personal transformation. Groundbreaking insights are included from representatives of many major world religions including Christianity, Judaism, Islam, Buddhism, Hinduism, Native American cosmology, and contemporary forms of spirituality and are complemented by the latest discoveries from science.

The Institute of Noetic Science has been applying the lens of science to the multidisciplinary study of the mysteries of consciousness since the early 70s, when IONS was founded by Apollo 14 astronaut Edgar Mitchell – the sixth man to walk on the moon. The Institute conducts evidence-based research, publishes papers in peer-reviewed journals, and offers books, videos, and educational resources for everyone from the general public to the most seasoned scientists.

About Marilyn Mandala Schlitz: For three decades, Noetics Scientist and anthropologist Marilyn Mandala Schlitz, PhD, has pioneered clinical and field-based research in the area of human consciousness, transformation, and healing. She is a thought leader on matters of individual and social change whose respected voice offers new insights into the most pressing challenges of our time. A researcher, speaker, change consultant, and writer, Marilyn's books include co-author of Living Deeply: The Art and Science of Transformation in Everyday Life and co-editor of Consciousness and Healing: Integral Approaches to Mind Body Medicine. Dr. Schlitz serves as the CEO and President of the Institute of Noetic Sciences (IONS), where she has worked for 15 years. She is also Senior Scientist at California Pacific Medical Center.