Desktop Alert Inc., provider of the most rapid IP-Based mass notification system platforms to the U.S. Department of Defense today announced that Headquarters NORAD and U.S. Northern Command has licensed the Desktop Alert Enterprise™ Mass Notification System. Breakthrough alert delivery speed insures alerts will be received by all targeted IP-Devices in 15 seconds or less for 99% of all alerting scenarios. 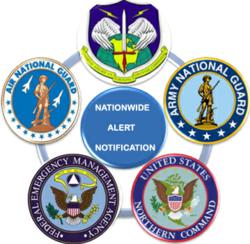 Our teams of world class mass notification engineers have proposed a new standard for IP-Based mass notification alerting within the Department of Defense. All alerts must be received in 15 seconds or less once published, not 1 to 3 minutes.

“This is a historical milestone for U.S. Military Early Warning Systems. The interoperability between these agencies aids the modern Warfighter by delivering intelligence in tandem to field operations through parallel asset sharing thus significantly bolstering our nation’s military response during a national emergency.    One to three minute alerting delivery provided by less capable mass notification platforms can quickly change a good intention into a dangerous action. Desktop Alert’s proven Department of Defense track record of alert delivery and alert receipt in less than 15 seconds across an Enterprise proved crucial in the selection process," said Howard Ryan, Chief Research and Development, Desktop Alert Inc.

"Our teams of world class mass notification engineers have proposed a new standard for mass notification alerting within the Department of Defense. That proposed standard is 15 seconds or less for 99% of all IP-Based alerts published. This accomplishment is unrivaled industry-wide and something that we are very proud of at Desktop Alert. We do it better, faster and often for millions of dollars less than the competition across the life-cycle of the product requirement. The word is getting out and our market share is seeing a dramatic increase,” added Ryan.

FEMA’s mission is to support our citizens and first responders to ensure that as a nation we work together to build, sustain, and improve our capability to prepare for, protect against, respond to, recover from, and mitigate all hazards.

U.S. Northern Command (USNORTHCOM, or informally just NORTHCOM) is a Unified Combatant Command of the United States military. Created on 1 October 2002 in the aftermath of the 11 September 2001 attacks, its mission is to protect the United States homeland and support local, state, and federal authorities. USNORTHCOM defends the U.S. homeland, protecting its people, national power, and freedom of action. USNORTHCOM has a twofold mission: Conduct operations to deter, prevent, and defeat threats and aggression aimed at the United States, its territories, and its interests in the assigned area of responsibility.

Desktop Alert is by far the most affordable commercial off-the-shelf (COTS) IP-Based Mass Notification Platform currently available to the U.S. Department of Defense. The product sells as a perpetual license with very low yearly recurring sustenance costs. The platform saves the U.S. Taxpayer many millions of dollars.

Desktop Alert is an Enterprise-class unified alerts management system that includes the capability to: