Michelle Williams to Speak out Against Bullying at NVEEE’s 2nd Annual “Not On My Watch” Red Carpet VIP Reception and Secret Millionaire Premiere Event Saturday, September 15, 2012 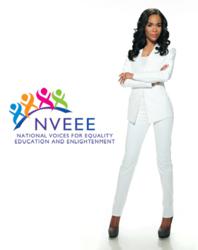 I was bullied in school because of my appearance. I was afraid to walk home from school out of fear for my life. I was ashamed of who I was. Words are very powerful. I want to use my voice for those who have no one to speak for them and empower them.

Singer and actress Michelle Williams was recently selected as a national celebrity spokesperson for National Voices for Equality, Education and Enlightenment (NVEEE), for her philanthropic efforts and commitment to using her voice to show today’s youth that people care about the issues they are facing, including bullying, violence and youth suicide.

According to a study conducted by Consumer Reports magazine, 1 million children were harassed, threatened or subjected to other forms of cyber bullying on Facebook during the past year. “I am excited to be part of an organization that address these issues,” said Michelle. “Our youth deserve to learn in a safe environment and not be harassed because of race, appearance or sexual orientation. I am excited to be a part of NVEEE’s movement.

As a national spokesperson for NVEEE, Michelle joins other notable celebrities, including Jaclyn Stapp, award-winning children’s book author, model and philanthropist, in bringing NVEEE’s message to the world. Michelle has already begun to make a difference. During an orientation session with the organization, she offered encouraging words to some of NVEEE’s Teen Spokespeople. “Always be true to yourself. Love and embrace the person you are. It takes courage to tell a teacher or parent when you are being bullied or if you witness someone else being bullied,” advised Williams.

Michelle will participate in the National “Not On My Watch” Public Service Announcement Campaign, and will be an integral part of NVEEE’s Mentoring and Peace Ambassador Program.
"I was bullied in school because of my appearance. I was afraid to walk home from school out of fear for my life. I was ashamed of who I was. Words are very powerful. I want to use my voice for those who have no one to speak for them and empower them to stand up for himself. No one should have to tolerate being bullied."

In addition to recording music and acting, Williams is active in several charities and recently worked with the American Heart Association. This year she partnered with the AHA on their Power to End Stroke & Most Powerful Voices Singing competition, an education and awareness campaign that unites people to help make an impact on the high incidence of strokes within their communities. She also recently hosted and performed at the Million Meals concert for Lauren Bush Lauren’s charity FEED. Michelle will also be aiding in fundraising campaigns for NVEEE’s “Not On My Watch” Bullying Prevention Program.

About NVEEE
Established in October 2009, NVEEE is a national 501(c)(3) non-profit organization with a mission to prevent bullying, violence and suicide among youth families and communities through direct service, mentoring and prevention education. NVEEE not only provides direct services to families and communities affected by bullying, teen suicide and school violence, but also provides programming to educational institutions through its staff and speakers bureau. For more information, visit http://www.NVEEE.org

About Michelle Williams
Michelle Williams is well known as one-third of record-breaking R&B and Pop sensation Destiny’s Child. She is also a multiple award-winning international singer, songwriter, record producer and actress. She has appeared on Broadway to rave reviews in 2003 in “Aida” and in 2007 joined the cast of hit “The Color Purple” for its national tour where she dazzled in the role of Shug Avery. In 2009, she joined the London West End production of “Chicago” making history as the show’s first African American to play the lead role of Roxie Hart. Williams later reprised her role in February 2010 on Broadway. Williams’ new album is scheduled to be released next year and a new single will be at radio this fall.