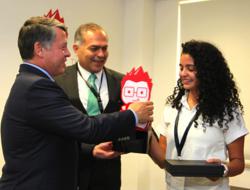 Simply put, Jordan has a Cool King who loves mobile apps and interactive video games. Where else would a monarch actually spend an afternoon in demos of iPhone Apps developed by high school student and then awards the winners personally?

Stemming from His passion for computer, video games, and mobile apps, and His vision to support the youth of Jordan and enable a creative ecosystem for game and apps/software developers in the Kingdom of Jordan, His Majesty King Abdullah II attended the finalist presentations and demos of iPhone Apps development competition for high school student teams from around the kingdom.

“Simply put, Jordan has a Cool King who loves mobile apps and interactive video games,” declares Dr. Usama Fayyad, Executive Chairman of Oasis 500 and former EVP and Chief Data Officer of Yahoo! Inc. “Where else would a monarch actually spend an afternoon in demos of iPhone Apps developed by high school student and then awards the winners personally?” continues Fayyad in a an interview at the Interactive Gaming Lab that King Abdullah II of Jordan had just inaugurated and funded through the King Abdullah II Fund for Development (KAFD), “In my long career from my days at NASA-JPL through Microsoft through Seattle and Bay Area startups and my 5 years with Yahoo! I have not seen anything quite like this.”

Fayyad continues with interview: “Last September, HM King Abdullah asked me to help with defining an iPhone App development competition for high school students. My reaction was that we should target university students as I thought high school level is too junior for development in objective C,” Said Fayyad who eventually served as a judge in the competition, “The King looked at me and said: ‘No; high school, and we need your help defining it.’ Looking at the results, I must say I was wrong and he was right!”

Participating students, aged between 15 and 17 years, worked in groups of five to design applications for mobile devices in a competition aiming at encouraging high school students on embracing the latest gaming and applications development technologies. The competing teams had one month to learn mobile apps development and produce a fully-fledged mobile application that aid tourists during their stay in Jordan. His majesty presented prizes to the winning team from Amman National School. In attendance where U.S. Undersecretary of State, Robert Hormats and the U.S. Ambassador to Jordan Robert Beecroft (see photo).

The event that took place at the inauguration of an interactive electronic gaming laboratory that was established under a Royal initiative with the aim of boosting the production capabilities of a fast growing cadre of gaming technology companies growing in Jordan. The lab is not only equipped with machines and resources that are unparalleled in today’s gaming arena, provides training on the essentials of game design, from story to interface to sound effects to all game developers in the country.

“It’s a rare and delightful moment to see a monarch supporting the youth of his country by attending a competition for high-school students, and interacting with them throughout their demos.” - Commented Nour Khrais Founder of Maysalward, a leading game development company in Jordan and the lead organizer of the competition.

Funded with support from the King Abdullah II Fund for Development (KAFD), and Managed by Jordan Gaming Task Force and Oasis500, the Lab is yet another step to turn Jordan into a regional hub for game developers, noting that the value of investment in the sector worldwide stands at around USD $80 billion.

Jordan’s plans to become a beacon for information technology in the Middle East is gradually uncovering with several partnerships, projects and investments in startups with companies like Oasis 500 that aims at launching and investing in 500 technology startups in the upcoming 5 years. Oasis500 gives entrepreneurs investment and acceleration to jump-start their business on an international level with seed funding, mentorship, incubation and acceleration, and access to angel investors with the support of big players from silicon-valley such as Google, Yahoo, and Microsoft.

The Oasis 500 Angel Network event held in Amman 2 weeks ago attracted 80 angel investors and VC’s with one third coming from outside Jordan to listen to 6 pitching companies. These companies received investments at terms that showed they were able to grow their valuation from 3x to 7x in the 100 days of acceleration spent at Oasis 500.

“Oasis 500 is achieving in its first year of operation in Jordan much more than Y-Combinator and Tech Stars have achieved in the U.S. in their start,” said Emile Cubeisy, Board Member of Oasis 500 and Managing Director of IV-Holdings, a VC Investment fund in Jordan. “The plans we are seeing are comparable to plans and growth rates of startups in Silicon Valley”.

About Oasis 500
Oasis 500 is the MENA region’s premier early stage and seed investment program, which includes entrepreneurship training, mentorship, incubation, and follow-on and angel investment funds. Set in Jordan, the Program concentrates on accelerating the transformation of business ideas into startup companies in Information and Communications Technology (ICT), mobile and digital media with a focus on entrepreneurs in the Middle-east Region.

Candidates of the Program and their ideas will embody and embolden a movement that will stir up a new breed of entrepreneur in the Arab world, ultimately changing its business landscape and the future of The Region for the better.

Oasis500 aims at accelerating the launch of 500 startup companies within the next five years, with a focus on the Information and Communication Technology (ICT), Mobile, and Digital Media sectors.

About JGTF
The Jordan Gaming Development Task Force is an open and independent coalition of Jordan’s premier gaming companies, the Task Force’s objective is to advance Jordan’s gaming development capacity and help propel the Jordanian gaming on a local, regional, and international scale.

Photos & videos are found on http://www.oasis500.net/gaming