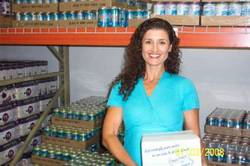 Yvette Berman- CEO and Owner- Organic By The Case

Your body--every body--has one favorite drink, and it's water, or what we like to call pure, unadulterated, functional WAT-AAH!

With another life lost to cancer every minute in the U.S. and six million lives lost annually worldwide, Katie Couric's "Stand Up To Cancer" (SU2C) fundraising simulcast event on ABC, CBS and NBC draws the spotlight onto obesity as a dominating contributor to cancer. National Action Against Obesity, Organic by the Case, Seattle Sutton's Healthy Eating, WAT-AAH!, and Authors of "Portion Teller" and the "Vice Busting Diet" applaud Katie Couric's courage and steadfast dedication to cancer prevention, treatment and research and urge America to "Stand Up To Cancer" by taking the necessary steps to eat right, exercise daily and avoid obesity.

"There's solid evidence Americans' eating and exercise habits are leading to cancer," said MeMe Roth of National Action Against Obesity and Children's International Obesity Foundation. "According to the American Cancer Society, we lose 100,000 lives annually to obesity-related cancer. Imagine the heart-wrenching hospital bed scenes that might never have to play out if we encourage our fellow Americans to exercise at least 30 minutes a day while avoiding processed junk food and instead eating mostly vegetables and lean proteins, as well as modest amounts of whole grains and healthy fats. This is do-able, especially among our children."

"By simply trimming down our food portions, we can substantially reduce obesity rates and risks for cancer while becoming a much healthier nation," said Lisa R. Young, PhD, RD, adjunct professor of nutrition at New York University and author of "The Portion Teller Plan". And it's not just the size of our portions contributing to obesity-related cancer, but also what's inside the food.

Avoiding substances suspected of promoting both obesity and cancer is driving up demand for organic food in the United States. Yvette Berman CEO and owner of Organic by the Case, LLC--a bulk organics supplier to homes, schools, camps and offices--notices her nationwide customers are making the connection of reducing the risk of disease and obesity by eating organic foods. "The statistics for cancer are staggering with one out of three women and one out of two men expected to become diagnosed with cancer in the U.S.," Berman said. "Through our website, we're seeing customers nationwide make every investment they can in their own health and their children's by buying organic. Higher in nutritional value, organic products are free of toxins, additives and preservatives. You are what you eat, and toxic-free foods are a pivotal factor in better health. Organic by the Case seconds Katie Couric's 'Stand Up To Cancer' crucial message of prevention."

"In order to reduce the obesity numbers, we need to start while children are young--the younger the better. And, we must lead by example and teach children healthy eating habits for a lifetime of health, so they don't succumb to diseases like cancer. Making wise food choices and providing a lifestyle that they can mimic throughout their lives is one of the most important things we can do as adults to help curb obesity," said Sutton.

Sutton continues, "Having a healthy diet can reduce most cancers, although I'm living proof that genetics does play a part in cancer. I'm a 9-year breast cancer survivor and my only sister died of the disease at a young age. Two of my cousins also had the disease and one of them died from it. We must be steadfast in prevention to help reduce this devastating disease in all its forms and eating healthy can be a tremendous help in doing so."

What about individuals already battling obesity? "Look, I know what it's like to be an overweight American. I was even a morbidly obese American at 130 pounds overweight," said T.V. and radio personality Julia Havey, author of "The Vice Busting Diet." "There's every motivation to find yourself again by eliminating the vices--one by one--that have been driving your obesity. The most common vices are Fast Food, Soft Drinks, Candy and TV. We need to ditch high-calorie, fat-filled Big Macs and Fries, pour out the Cancer~Cola, chuck the chocolate, get our butts up off the couch, drop the video game controller, turn off our computers, and move our bodies for 30 minutes a day. Now more than ever we understand the clear connection of obesity and cancer risk. I'll do all that I can to support Katie Couric's 'Stand Up To Cancer' and anyone in need of help reducing their risk of cancer by achieving a healthier weight."

"Your body--every body--has one favorite drink, and it's water, or what we like to call pure, unadulterated, functional WAT-AAH!," said Rose Cameron, Let Water Be Water founder and marketer of the WAT-AAH! premium water product line for kids ages 6-15 sold at Whole Foods. "It's no secret Coca-Cola and PepsiCo make every effort to ensnare children into the trap of sweet drinks from infancy on, whether it's through their respective juice companies or their Coke and Pepsi products including their PowerAde and Gatorade lines. We believe kids deserve water that's 100% free of artificial dyes, flavors, additives and sweeteners. With WAT-AAH!, we're simply getting kids fired-up about drinking water. As fun as that is, we realize the greater goal is to save lives by preventing obesity and life-risking diseases such as cancer linked to obesity."