A special report from American Pulse™ provides a glimpse into the last-minute mindset of American voters heading into the 2012 presidential election. The complimentary report covers hot button issues both on the home front and abroad as well as identifies voting beliefs and behavior and popular post-voting activities. 3,615 respondents participated in the October 2 American Pulse conducted 10/23-10/29/2012, utilizing BIGinsight™ and reInvention survey panels. The latest results show Romney on top less than a week away from the election. 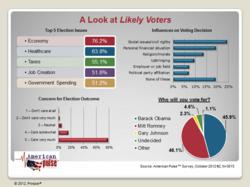 With the 2012 presidential election less than one week away, a special complimentary report from American Pulse™ provides timely and trended insights regarding hot button topics, voting behavior and preferences, straight from the voters likely to shape the outcome of the election. (The latest poll includes 3615 respondents; Margin of Error is +/- 1.6%.) Close to 9 in 10 (86.8%) U.S. Adults 18+ likely to head to the polls (or already have) and their opinions on issues facing the country provide a glimpse into who their plan to vote for and why.

Key Findings Among Likely Voters: (View the full report which includes popular segments that may make or break the election.)

What does it mean for the election?

View the full report which includes popular segments that may make or break the election. And for even more trends on Voters and additional segments, check out the complimentary American Pulse™ App and InsightCenter™. Click HERE for more information.