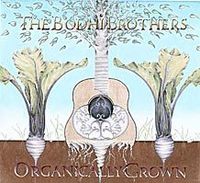 Organically Grown by The Bodhi Brothers serves up SonoNutrients for the ears.

Die to yourself and free your soul

Christopher Taylor and Johnny Om refer to their label's repetoire as a relaxed, unbuttoned mix of mellow alternative folk/blues sounds. The co-founding singer/songwriters released three albums in the folk rock and new age markets in 2008, including Taylor's Remains to be Seen and Om's Meet the Beast. Artistic vision, unique voices and a solid approach to business establish Organically Grown Music as an independent label to watch.

Christopher Taylor and Johnny Om met on the island of Kauai in 2000 and immediately struck up a musical relationship that was to evolve, by 2003, into their group, The Bodhi Brothers. The label was founded the same year on the principle that popular music can be professionally produced without having to comply with commercial standards for how it should sound; today, Organically Grown Music remains committed to being a label that can't be labeled.

The Taylor/Om team has engaged a collection of specialists to handle the label's recent launches. Kathleen Monahan of KDM Promotions is on board to service radio, Clay Pasternak Inc. distributes to retail, Greg Steffan books retail performances and Suzanne Doucet of Only New Age Music consults on outreach to the new age and spiritual community; Doucet will also represent the label internationally at MIDEM 2009. They are also supporting the new releases with print ads in New Age Retailer and The Leading Edge, as well as an internet marketing campaign. The album is also available through New Leaf Distribution.

Organically Grown Music's name reflects both the grassroots process of musical creation and the holistic lifestyle of the co-founders. Taylor and Om produced their first CD by The Bodhi Brothers -- appropriately called Organically Grown -- with multi-instrumentalist/co-producer Jack Lee, former lead guitar for blues legend Tracy Nelson and keyboard player for bluegrass supergroup The Earl Scruggs Review. Their ensuing collaborations, Remains and Beast, hit radio and retail in fourth quarter 2008, and are being embraced by folk rock, spiritual and conscious communities worldwide.

"In making music, we pay as much attention to the process and the message as we do to the music itself," says Om during a rehearsal break in the group's Nevada City, CA studio. Om and Taylor's "open book" approach to composing is a major part of the label's appeal, as fans feel engaged in each artist's spiritual and musical evolution. The label further appeals to its "conscious core" following by taking a green approach to physical product packaging, augmented by distinctive art design and original illustrations by Om.

"We live an organic lifestyle, so it just made sense to us that we'd avoid plastic CD cases but still offer an album that someone could hold in their hands and find aesthetically pleasing," Om adds. "It's a process, much like our music. We rarely start out with a preconceived idea, we really try to stay open; usually, we end up with something that we couldn't have imagined, and that really pleases us."

This "walk your talk" label vision that Taylor and Om share is similar to a modern version of the New Age label Soundings of the Planet, which was established in the 1970s and continues a creative, artist-centric approach. The duo foresees continued collaboration with like-minded professionals such as co-producer Jack Lee, percussionist MB Gordy, vocalist/violinist Onyay Pheori and flute/sax/pennywhistle player Richard Hardy, all of whom contributed their talents to the two solo albums.

Taylor's songs on Remains convey a sense of spirituality and self-inquiry through his deep voice and lyrics, as well as his use of vocal harmonies, solid rhythms and vivid tones of his 12-string and electric guitars. Om's Beast has been described as "a smart, hip musical journey through contemporary America's hopes and dreams in these first years of the 21st Century."

"As artists, we want to connect with our audience and have them feel supported by our music," Taylor explains. "I like to write about the fears and the moments of inspiration that are universal to all human nature."

According to Taylor, the song "Love's Around the Corner" is about determination and human courage, to persist in following your dreams even when you're feeling your lowest, while "Come to the Center" bears a simple message, but one that's very easy to forget in our busy lives. From its first line, "The Sun Shines" declares: "Die to yourself and free your soul," which, he says, "simply means that if we're going to grow beyond ourselves, we need to let something of the old self, and its habits, die off." There are 13 tracks on Remains to Be Seen.

Om's Meet the Beast incorporates world beats and exotic instrumentation in 19 songs of social awareness flavored with humor. Of his process, he notes, "I gathered a long list of my songs related to social awareness, then selected those I felt worked best together as a whole. I had all these monkey songs because the monkey had become my metaphor for the current state of the human mind, chattering away but not really saying much. There are big issues that we as a global community need to face - either we evolve beyond the shadow politics responsible for wars, economic slavery, and environmental abuse, or we die. To buffer the intensity of the message, I added some humor and a few heart songs. I think that makes for a nice balance."

Forthcoming productions will include a mellow series of instrumental music for meditation and relaxation, or, as The Bodhi Brothers might call it "SonoNutrient Ear Food." While additional productions are scheduled for 2009, the immediate future of OGM includes playing live at small venues to support the albums and growing the label's fun-loving and spiritual community of like-minded fans. Those in need of nourishment are invited to indulge at the OGM website, or join the feast at MySpace.com.

CDs are available from http://www.CDBaby.com, http://www.Amazon.com, and quality book and record stores, including Borders Books and Music.

Meet the Beast by Johnny Om looks to the monkey within.CD Cover Image

Om andTaylor in the OGM studio