overstockArt.com Releases its Annual Top 10 Most Popular Oil Paintings of the Art World. According to the online art gallery's statistics Vincent Van Gogh's Masterpiece is the most popular oil painting on the planet. 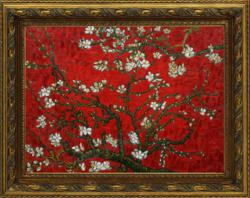 According to statistics by overstockArt.com, Vincent van Gogh's "Branches of Almond Tree in Blossom" was the most popular oil painting in 2010. Pictured is the gallery's trademarked red rendition.

Consumers are interested in knowing what’s selling best because it allows them keep up with the latest decorating trends and to know which paintings are the trendiest and most desirable on the market.

Van Gogh continues his reign as the best-selling artist this year. According to overstockArt.com statistics, van Gogh's magnum opus "Starry Night" was the world’s most popular oil painting in 2009 and the most popular oil painting of the past decade. He consistently has more than one work of art included in the Top 10 list and this year, has secured four spots in the Top 10. "Van Gogh consistently remains the most popular artist in the world, his total sales numbers have left everyone well behind," said David Sasson, CEO of overstockArt.com.

overstockArt.com is the world's most popular online art gallery, driving more than 600,000 monthly visitors; it has a unique perspective on what's hot in the art world.

The top oil paintings sold online according to overstockArt.com are:

"Blossoming Almond Tree" is one of van Gogh's best known works of art and is noteworthy as van Gogh painted it in honor of his namesake, his nephew Vincent. The tour-de-force depicts big branches of white almond blossom set against a blue sky. In 2010, overstockArt.com debuted several renditions of the painting featuring different colored backgrounds. The online art gallery trademarked the red rendition, which according to Sasson, quickly became a best-seller.

"It was without a doubt the introduction of the red, green and yellow renditions of van Gogh's 'Blossoming Almond Tree,' which caused the painting to garner so much attention this year and place number one on our Top 10 list," stated Sasson. "We saw an almost instantaneous increase in sales of the painting when the different interpretations were introduced, particularly with the red interpretation, which was an immediate best-seller."

Rothko is new to the Top 10 list this year. overstockArt.com attributes the artist's resurgence in popularity to AMC's Emmy and Golden Globe - winning series "Mad Men." Ever since Rothko's masterpiece "Number 12" was first shown hanging in Bert Cooper’s office in the award-winning series, sales of his art has increased a large amount, earning him the ninth slot on the 2010 Top 10 list.

The Top 10 list is released annually due to popular demand, "Consumers are interested in knowing what's selling best because it allows them keep up with the latest decorating trends and to know which paintings are the trendiest and most desirable on the market."

In 2010 overstockArt.com sold more than 60,000 oil paintings. They are one of the web's most successful distributors of wall decor items with more than 20,000 daily visitors and 120,000 loyal customers.

About overstockArt.com:
overstockArt.com is the web's leading distributors of art reproduction oil paintings, with more than 100,000 wall décor combinations to choose from. In business since 2002, the company provides decorating assistance, custom framing and commercial wall decorating services. With an inventory of more than 60,000 paintings in stock at all times, order wait is minimal. The Wichita-based online art gallery was recognized as one of the fastest growing companies in the U.S. in the 2010 Inc. 500|5000 list. For more information, visit http://www.overstockart.com/press-room.html .

The Kiss by Gustav Klimt