The Fourth Edition of the International Contemporary Art Fair in London will Showcase Emerging and Established Artists from over Thirty Countries. 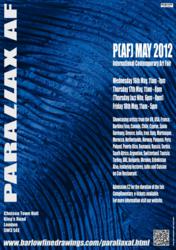 The fair itself will exhibit over 2000 works of art and will be the second of the event to be held at the new venue Chelsea Town Hall, which takes place from 16-18 May 2012 in London.

Featuring over 200 artists from thirty different countries, the new Parallax Art Fair catalogue is now released and includes an essay by Dr Chris Barlow titled Proem 1846: Contemporary Art: Context and Conservation. The fair itself will exhibit over 2000 works of art and will be the second of the event to be held at the new venue Chelsea Town Hall, which takes place from 16-18 May 2012 in London.

“I am extremely excited by the mixture of such varying artistic objects from all over the world,” explained Dr Barlow. “Some of these artists would never meet in any other event and it is highly unlikely, given the Disney-like nature of so much curatorial work, that such a diverse mixture of objects would ever be given a chance to be experienced by visitors and researchers interested in this thing we term ‘contemporary art’ and its display. I am particularly pleased that we have work from India, Tunisia, Morocco and Costa Rica.”

Some of the highlights will include a 10ft-high anti-war memorial with sculpted bronze dogs and skulls; reliefs made from computer components; a video work about child brides by the young British Asian artist, Shammi Begum; and ceramics wrapped in bubble wrap by Catriona Robertson that considers gallery health and safety, and cleverly references earlier Parallax Art Fairs - metaphorically referred to by the PAF team as like a Schwarzchild wormhole. “Too often” adds Dr Barlow “certain objects that the industry generally still marks with the word ‘figurative’ can get overlooked, but I want to emphasise that the philosophical approach of PAF means that we are not interested in generating a chimera of hierarchy or relevance. How these illusions are often formed through the mechanisms of art history and display is one of the areas that the PAF project is keen to indicate to artists and visitors, and which I draw attention to in the catalogue essay. Highly wrought surrealist-like paintings and sculpture, as well as quirky pieces of fish, warships, birds, Queen Elizabeth I, architecture, Donald Duck, blood cells and even grass blades will also be on show.”

Parallax Art Fair is the first art fair of its kind to investigate new theories from art history in its approach. It showcases established and emerging international contemporary artists.

The fourth edition of Parallax Art Fair takes place on Wednesday 16th May to Friday 18th May 2012 at Chelsea Town Hall, King’s Road, and is “curated” by Dr Chris Barlow.

Entry is £2 for the entire duration of the fair with 50% being donated to A21. Complimentary tickets are available.