Oil Price Closed Above $100 a Barrel; World Leaders Ignore this Signal of Impending Shortages, According to TheOilDrum.com

The price for West Texas Intermediate (WTI) oil closed above $100 for the first time on February 19, 2008. "Rising oil prices have been giving a clear signal of pending shortages for over five years now," according to TheOilDrum.com. By ignoring this signal, world leaders are steering the world toward an energy disaster characterized by shortages, high energy prices, inflation, civil unrest and famine. 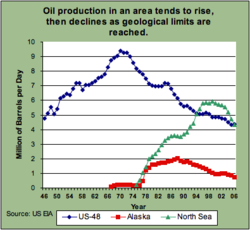 The world is now reaching the point where in the aggregate, all of the oil fields of the world are coming to peak production.

The price for West Texas Intermediate (WTI) oil closed above $100 for the first time on February 19, 2008. "Rising oil prices have been giving a clear signal of pending shortages for over five years now," according to TheOilDrum.com. By ignoring this signal, world leaders are steering the world toward an energy disaster characterized by shortages, high energy prices, inflation, civil unrest and famine.

The $100 a barrel closing price is a sign that times will never be the same again. "The world is entering a new era. In this new era, the supply of energy will dominate the political landscape in a way that is not being recognized by any of the presidential candidates," according to TheOilDrum.com.

In past years, newspapers and magazines have assured citizens that there is no problem with future oil supply. Articles have suggested that oil prices will be lower in the future; they may even collapse due to excess supply.

Recently, published articles have added some caveats. There is a need for increased investment, both for exploration and for improved production technologies. The media doesn't mention that rates of return on the new investments are likely to be very low. At some point, it will become economically unattractive to keep searching for very small quantities of oil and gas that are expensive to extract.

The problem that oil companies are encountering is that there is a finite number of oil reservoirs, and many of these have been producing for over fifty years. In time, a large part of the oil that was originally in place has been removed. The oil that comes out now, comes out slowly, and is often mixed a high proportion of water.

According to Gail Tverberg at TheOilDrum.com, "This problem of reaching irreversible decline happens for whole regions, the way it does for individual fields." For example, US oil production in the 48 states reached a peak in 1970. US production has since declined from a maximum of over 9.6 million barrels a day, to the current level of around 5 million barrels a day. (A barrel is 42 gallons.) More recently, the oil fields of the North Sea, Alaska, and Mexico have also begun to decline.

As more and more areas deplete, smaller fields are brought into production. Because they start out with less oil, these small fields do not last as long. Drilling activity must be increased in order to find even smaller fields. These, in turn, deplete even more rapidly, exacerbating the need for new wells.

According to TheOilDrum.com, "The world is now reaching the point where in the aggregate, all of the oil fields of the world are coming to peak production." As peak world production draws near, the rate of increase in oil production can be expected to stall because of constrained resources. This can happen even with rising demand. Once production falls short of what is needed, oil prices can be expected to increase, so that demand is brought in line with available supply.

There is now a fragile balance between demand and available supply. All ears await the next OPEC announcement on March 5. Will OPEC lower production? Will they leave production the same? Even in this country, any minor refinery incident has become a cause for concern, and a possible spike in oil prices.

In the coming months, the $100 per barrel closing price marker will be lost in the debate over other issues. The issue of limited oil supply is not an issue that will go away, however. Rather, it will steadily increase in importance. Eventually, there will be the cries for action, and for culprits to blame -- most likely within the first term of the presidential candidates.

"The presidential candidates currently pay little attention to energy policy. This needs to change," according to TheOilDrum.com. It would be best if candidates could change their focus before events force a change. So far, however, the markers of an approaching energy crisis have been largely ignored.

About The Oil Drum
The Oil Drum is a web-based community that discusses all aspects of energy -- from science and technology to its societal and geopolitical impacts. The editors and readers are drawn from many disciplines in academia and industry. The Oil Drum has a staff of more than twenty including individuals from the United States, Canada, Europe, and Australia.