A new 10-minute documentary video has been released online, depicting the journey of a chronic pelvic pain patient, Michelle Brown, 45, who has overcome 15 years of unbearable and debilitating painful bladder and bowel symptoms related to her many adhesions surgeries and her hysterectomy, with the use of a new wearable therapeutic ultrasound device, PainShield® MD. The video, available at http://www.kevmed.com/Testimonials.html, illustrates the life-changing effect of this novel device, which is a non-invasive, low-risk treatment modality for chronic pelvic pain. 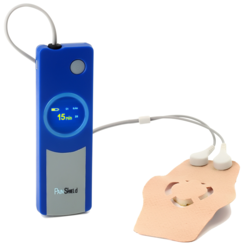 I'm so happy. I've got so much more energy! I feel so much better! I'm off all those [pain] medications.

An inspiring 10-minute video has just been released by KevMed LLC, documenting a patient’s successful battle with debilitating chronic pelvic pain. Michelle Brown’s journey began in her late teens when her colon tore during surgery for a ruptured appendix, resulting in infection and adhesions (internal scar tissue), causing pain and bowel obstruction. With her condition worsening to include diagnoses of irritable bowel syndrome and fibromyalgia, Michelle, now 45, endured thirteen surgeries to remove adhesions and eventually a hysterectomy, all leaving her in ever increasing pain.

Trying all kinds of therapies, Michelle trekked across the USA and beyond to Germany, England and Mexico, to find specialists who could cure her chronic pelvic pain. Bladder pain and dysfunction required painful trips to the bathroom to urinate as often as 70 times per day, and at least hourly during the night, robbing her of much needed sleep. Bowel dysfunction from adhesions caused infrequent, extremely painful bowel movements, exacerbated by the side-effects of her many pain medications. Already limited in her ability to move without excruciating pain, the pain medications - costing between $300 and $1000 in out-of-pocket expenses monthly - also left Michelle lethargic and gaining 45 pounds. Michelle’s marriage suffered, as did her ability to drive, work, care for her two children, and lead an active, fulfilled life.

Michelle’s life changed in late 2010 shortly after enrolling in a clinical study being conducted by the International Adhesions Society to evaluate PainShield® MD, a novel wearable, non-invasive device delivering therapeutic ultrasound. Within just a few days of using the new device, Michelle noticed improvements in her bladder pain, her painful bowel movements started normalizing and she needed less pain medication. Six months of treatment, and Michelle had discontinued most of her pain medications, she could sleep through the night, bathroom visits no longer dominated her schedule, and she lost 36 pounds. “I’ve got so much more energy! I feel so much better!” beams Ms. Brown. “I can walk around more. I can do the games with the kids where you’re moving around,” adds Michelle.

Remarks Dr. David Wiseman, founder of the International Adhesions Society, “the results from the participation of Michelle and others in the PainShield® MD clinical study were so compelling and game-changing that we set up KevMed, LLC to market the device.” Results of the PainShield MD clinical study can be found on the KevMed website. PainShield® MD is believed to act by delivering therapeutic ultrasound energy to the pelvic muscles and other tissues, increasing blood flow, reducing spasms and reducing pain. Unlike conventional ultrasound, its miniature format means that its use is not limited to a therapist’s office or only 30 minutes of therapy at a time. The fact that PainShield MD can be worn for several hours at a time, almost anywhere, means that therapy can be provided over an extended period, maximizing its benefit.

Says David Wiseman, PhD, President and Founder of KevMed, “we are pleased to publish this inspiring video. Pelvic pain patients now have another option: non-invasive therapy they can administer at home, at work, even during sleep. “Adds Wiseman, “regaining control over one’s life is a key step toward recovery. Along with the other success stories of PainShield MD users we are posting on the KevMed web site, we hope this video will encourage and inspire pelvic pain sufferers.”

About KevMed
KevMed LLC is a medical company dedicated to the relief of chronic pelvic pain and related disorders. KevMed was born from the work of the International Adhesions Society (IAS), which provides information, support, and advocacy to patients and their families suffering from Adhesion Related Disorder (ARD) and Complex Abdominal and Pelvic Pain Syndrome (CAPPS). Research by the IAS has revealed new understandings of these and related conditions from the perspective of the patient, resulting in the identification of PainShield® MD as an effective treatment for pelvic pain. Both KevMed and the IAS were founded by David Wiseman PhD, MRPharmS, an internationally recognized expert in the science and business of adhesions, who has been making important product and scientific contributions to the field since 1987, most recently with Synechion, a consulting company he founded in 1996.
Contact:
Dr. David Wiseman, President
KevMed™, LLC
15305 Dallas Parkway, Suite 300, Addison, TX 75001
972 931 5596
david.wiseman(at)kevmed(dot)com