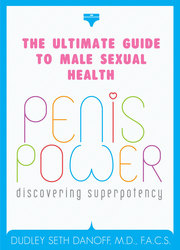 While it’s normal to define anything with a penis as male, Dr. Danoff suggests men examine how their own penises may be defining them..."Ninety-five percent of who we are as lovers is between our ears and 5% between our legs."

It’s an indelible image on the American mind – the 42nd President of the United States, William Jefferson Clinton, caught in a 1998 sex scandal, publically dodging questions about his male anatomy and the “state of his union” with a female White House intern. Reflectively, it could have seemed a bit ironic to Clinton, who just a few years earlier in 1994, signed a bill clearing the way for a National Men’s Health Week so that all things uniquely male could be more openly discussed.

This year, National Men’s Health Week is celebrated from June 14th through Father’s Day, June 20th and while stiff resistance to talking about the penis has softened somewhat since 1994, actually saying the word “penis” still leaves more then a few people blushingly tongue-tied in the 21st century. Fortunately, it didn’t take an act of Congress for another Chief Executive by the name of Dudley S. Danoff, President of the prestigious Cedars-Sinai Tower Urology Medical Group in Los Angeles to recognize that for men to overcome their issues of “penis weakness,” everyone involved needed to get past the “blush factor” of saying the word above a whisper.

“Penis is to an urologist what stomach is to a gastroenterologist or heart is to the cardiologist.” explains Dr. Danoff, author of Penis Power - The Ultimate Guide to Male Sexual Health. “It’s not a ‘dirty’ word and it’s not pejorative. In the past, publishers balked at featuring the word penis in my book’s title. Now it’s on the cover where it belongs and blended together with a tasteful penis graphic, too.”

Since “Penis Power’” debuted in February 2010, Dr. Danoff’s candidly good natured sex education style has made him a sure bet for an informative and entertaining call-in talk show. Phone lines lit up non-stop during Detroit’s WRIF “Drew and Mike Show” as calls from perplexed penises “too big,” “too small” and just too worried about it all poured into the radio station. The hosts endorsed the book to their audience, saying “We recommend Penis Power, it's a lot of fun to read and very educational!"

“It has so much information,” said “Rules of Engagement” host Amber Kelleher Andrews about Penis Power during her Los Angeles-based KFWB show. “Really, your book covers everything." Logging on to BlogTalkRadio’s “Little Jared and Little Dean Show,” found the hosts praising “Penis Power” as “an incredible book and clever from cover to cover” with Dr. Danoff receiving the ultimate on-air compliment as "hands down the best interview we've ever had!"

According to the American Urological Association, over 25 million men in America are dealing with some form of erectile dysfunction (ED), but because they find the condition embarrassing, only around 5 percent actually bother to seek treatment.

"Women annually go for a pap smear and breast exam.” states Dr. Danoff. “But men remain reluctant to talk about ED or show up for a yearly prostate check-up. True, there’s nothing fun about a prostate exam but on the other hand – and remember there’s an urologist on that other hand – it’s no picnic in the park for us either. Guys need to bite the bullet, get examined and discuss genital health issues like male impotence that could also be a warning sign of a serious underlying medical condition."

While it’s normal to define anything with a penis as male, Dr. Danoff suggests men examine how their own penises may be defining them and so he offers important health information along with valuable insights into identifying positive penis personalities (visit http://www.penispowerworldwide.com for details) that propel men toward “super-potency” both inside and outside the bedroom.

“Ninety-five percent of who we are as lovers is between our ears and 5% between our legs.” explains Dr. Danoff who has examined some 200,000 penises over his forty year career. “We behave in the bedroom like we behave in the boardroom and vice-versa. Doesn’t knowing that make your office meetings more interesting? It’s not about penis size. I’ve never heard any woman say ‘Could you make my man's penis longer?’ What they have said is ‘Can you make it firmer and attach it to a nicer guy?’ Penis Power offers a drug-free, surgically-free way to enhance any man’s sexual power and that makes it as much a book for women to read as men since both can naturally benefit by eliminating erectile dysfunction from their lives.”