New Media Conference For The Masses 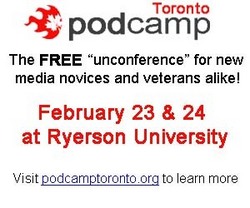 "PodCamp is a great way for new media beginners and experts to meet and learn from each other," said PodCamp Toronto Co-organizer Jay Moonah.

PodCamp Toronto 2008 will bring together professionals and hobbyists from across North America to explore the cutting-edge of new media. Key features of the event include:

Over 260 people have already registered to attend the conference, and people have signed-up to host more than 30 sessions.

This is the second PodCamp to be held in Toronto. The first was held in February 2007. Over 300 people attended the event. The first "PodCamp" took place in Boston in 2006. Since then, the format has become popular worldwide.