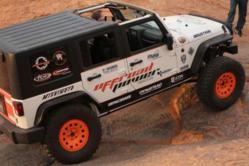 Big things happen at Power Products Unlimited, Inc. all the time but the last month was especially generous in terms of big moments for the growing company.

It all started with preparation for this year’s Easter Jeep Safari in Moab, UT. It looked like a great opportunity for Power Products to gain some exposure on the national off-road scene for the Off-Road Power Products website and their new venture as the West Coast Diesel Bruiser Installation Facility. In preparation for the event they used a Bruiser Conversion kit to put a 4 cylinder Cummins engine into their 2009 Jeep JK 4 door Unlimited. They finished the build on Tuesday April 3rd at about 8 pm and immediately jumped in it and drove it to Moab, 951 miles away. The Jeep performed flawlessly and conquered some of the better known obstacles in Moab including Potato Salad Hill, Hell’s Gate, Hell’s Revenge, Tip-Over Challenge and the Moab Rim Trail. At the end of the week they drove the Jeep all the way back to Spokane without a hitch. To say that it turned a few heads would be an understatement.

During the week they were in Moab, their triple EFR turbo 2007 Dodge Cummins showed up on the cover of Off-Road Magazine. The shoot was done with the editor of the magazine, Jerrod Jones, back in late February when there was still snow on the ground and the guys feel like it is one of the better written diesel articles that they have read in a while. Jerrod spent a lot of time getting the details of the build right, proving why they are one of the best publications in the industry.

Upon returning to Spokane last week Power Products was hit with 3 other bits of big news. First of all their Off-Road Power Products division was named as the Official Retailer of the 2012 Peterson’s 4-Wheel & Off-Road Magazines Ultimate Adventure. The national exposure for the company is really cool but maybe even cooler is the perk that comes along with it. As a sponsor they get to participate! This means that they get to take the build on the Jeep a few steps farther in preparation. Jeff Garland of Diesel Bruiser has graciously agreed to be their co-driver for the event. Jeff is a great guy and through the Bruiser JK project everyone realized what a great team the two companies make. In related news, the guys over at Hazzard Fab.Worx were named the “Official Fabrication/Build Shop” of the Ultimate Adventure. That means that they are building the official vehicle of the event. Fred Williams, the co-coordinator of the event had the 2012 Jeep JK transported to Spokane and will arrive later this week to discuss details of the build with the Hazzard gang. Details of the build are top secret but you can be certain it will put Hazzard Fab.Worx on the map as one of the coolest off-road shops in the country.

The second piece of big news arrived within a couple of days of the first. As you may know Power Products produces their own diesel additive product line called Fuel Bomb. Fuel Bomb will be the “Official Additive” of this years Diesel Power Challenge. The DPC takes place in Denver from May 7th-9th and is designed to showcase 10 of the best built diesel trucks in the country in a series of competitive events ultimately leading to one winner. It’s a pretty big deal for the growing additive brand to be a part of such a hugely publicized event and to say that they are proud would be an understatement.

The 3rd piece of news is still under wraps but it involves a big automotive show in Las Vegas in November. Details to follow.

In drag racing news Diesel Power Products has reached a partnership agreement with Specialized Diesel Northwest that will ensure that their 12V Cummins drag truck makes the circuit this year. Owner Chris Berend and lead technician Alan Craft plan to throw their time and attention at the truck to make it a contender. It’s a partnership that’s a win-win for both companies and they are excited to see the truck hit the track.

Last but not least I wanted to mention that we are the top title sponsor for this year’s Spokane Community College Charity Dyno Event that will take place on May 19th here in Spokane. The dyno will benefit the Wounded Warrior Project and the Make A Wish Foundation. Last year’s event was a huge success and we believe this one will be even bigger!
It's shaping up to be a huge year for the gang at Power Products Unlimited!