For the first half of 2012, the Toyota Camry is once again the No. 1 selling car in America. In a vehicle lineup filled with American favorites, the Camry has struck a chord with U.S. car buyers that has resonated for three decades. The Camry is the crown jewel of the Toyota lineup, and it’s one of many reliable Toyota models available at Prestige Toyota of Ramsey, New Jersey. 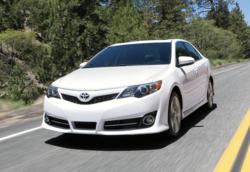 Customers of all ages love the Camry for its practicality and reliability. It’s a vehicle that has shown lasting, universal appeal.

In a recent Experian Automotive report, the Camry ranks as the No. 1 selling vehicle in the U.S., leading the highest-volume vehicle segment of 2012 – midrange cars. Prestige Toyota is pleased to offer the Camry, as well as its smaller sibling, the Corolla, which also ranked in the top ten best-selling vehicles.

First manufactured in 1982, “Camry” is an English version of the Japanese word “kanmari,” meaning “crown,” according to caranddriver.com. The midrange sedan has lived up to its moniker, ranking as the best-selling vehicle in the U.S. 14 of the past 15 years. Since the addition of the Camry Hybrid in 2006, this vehicle has positioned itself not only as a dependable, versatile sedan, but also as a class leader in fuel efficiency.

“The Camry has been one of the best-selling vehicles for good reason,” said Steve Reedy, general sales manager at Prestige Toyota. “Customers of all ages love the Camry for its practicality and reliability. It’s a vehicle that has shown lasting, universal appeal.”

Pat Pernillo, who recently purchased a 2013 Camry SE from Prestige, has been thrilled with the car’s dependability. “My new Toyota Camry is like a security blanket, because I know when I get in the car in the morning, it’s going to start,” she said.

The Corolla, Toyota’s entry in the compact sedan market, placed sixth in U.S. sales for the first half of 2012. According to Toyota, 80 percent of all Corollas sold in the last 20 years are still on the road, standing as further testament to the brand’s legendary reliability. New 2013 Corollas have already arrived at Prestige Toyota, with special incentives available for remaining 2012 models.

Customers interested in a Camry purchase or Corolla lease should visit Prestige at http://prestigetoyota.com or call 888-356-2136 to speak with an experienced customer service professional.

Prestige Toyota of Ramsey, New Jersey, is an authorized Toyota dealer that provides the surrounding area with quality Toyota vehicles, service, and parts. Thanks to Prestige Toyota’s friendly, knowledgeable staff, thousands of car shoppers have become satisfied Toyota owners and lessees. Prestige Toyota is owned by Prestige, one of the largest dealership entities in the United States.