Screening at the Santa Fe Film Festival, "Something Unknown is Doing We Don't Know What," takes viewers behind the lens of one South African woman's 10,000-mile journey to interview scientists, witness real lab experiments, and observe multi-cultural settings of spiritual healings. The film explores science of psychic experience, also in "Men Who Stare at Goats," a movie, starring George Clooney and Ewan McGregor, and Dan Brown's "The Lost Symbol." 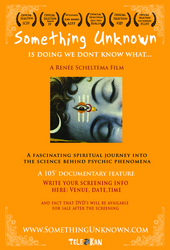 Hush, A portrait of Tracy Payne

The award-winning documentary "Something Unknown is Doing We Don't Know What" will screen at the Santa Fe Film Festival next month, the filmmaker announced today. Directed by the journalism and criminology-educated Dutch filmmaker Renée Scheltema, the film explores some of the same psychic and paranormal concepts explored in this weekend's release of "Men Who Stare at Goats", a movie starring George Clooney and Ewan McGregor, and the recent break-away Dan Brown novel "The Lost Symbol."

"Something Unknown" challenges conventional science to demystify psychic and paranormal experiences by revealing scientific evidence that consciousness can influence the physical world. It uncovers decades of pioneering research conducted by governments, universities, and independent scientists to explore quantum physics principles that indicate humans are interconnected by energy fields and have extended capacities of consciousness that transcend time and space.

"Something Unknown will screen at the following festival times and locations:

A panel discussion among scientists in the film, including physician and spiritual healing advocate Dr. Larry Dossey, follows the Saturday screening; 4 p.m. at the Santa Fe Hotel. Tickets are available online at http://santafefilmfestival.com/Tickets .

"A series of personal incidents that could not be explained by rational thought or coincidence inspired my quest to understand psychic events," said Scheltema. "No documentary had used straightforward scientific facts and research to clarify these experiences for people who have them or even question them."

Something Unknown is Doing We Don't Know What (105 min.), which takes its title from the uncertainty principle in modern physics, is available on DVD in both NTSC and Pal formats from the film's website. Priced at $24.95 for individual copies, discount packages are available for wholesale, universities, institutes, libraries, and community screenings. It is distributed in the United States by Beyond Word's publishing and is also available in select retail stores.

About the Film
"Something Unknown" takes viewers behind the lens of Scheltema's 10,000-mile journey to interview scientists, witness real lab experiments, and observe multi-cultural settings of spiritual healings. Along the way, she asks scientists to share their research and answer in plain talk the questions that haunt believers and skeptics alike: Can we predict the future? Can our thoughts and intentions affect the physical world? Can we be spontaneously healed from fatal illnesses? Do we have the power to read minds? Are we "energetically" connected? And where is the boundary between 'real' magical powers and fraud?

About The Filmmaker
Renée Scheltema is a Dutch documentary filmmaker and photographer living in Cape Town, South Africa. For 25 years, Renée has worked for Dutch television as a director, producer and camera-person. Some of her documentaries, like "Hush, A portrait of Tracy Payne", "Seven Days in Burma", "The Death Penalty", "Portrait of A Zen Couple," "The Bus" were selected at international film festivals. She holds advanced degrees in journalism and criminology and a bachelor's degree in law. In 1996, she founded Telekan films.

"Something Unknown" features the science of spiritual healing

"Something Unknown" answers new questions this old ESP machine could not

Renee Scheltema, director of "Something Unknown"

Award-winning documentary "Something Unknown is Doing We Don't Know What"