Obama and Romney Tied with Registered Voters, Romney has Slight Edge among Likely Voters, According to New American Pulse™ Analysis

3,666 respondents participated in the 2nd April American Pulse conducted 4/23-4/30/2012, utilizing BIGinsight™ and reInvention survey panels. The presidential race will be a close one, likely to be influenced by those voters currently undecided. The latest American Pulse results show that these Undecided Voters view the weak economy, unemployment and national debt as the worst problems facing the U.S.—problems they don’t feel President Obama has dealt with well. 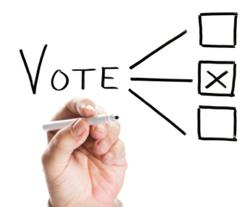 Lack of Confidence Likely to Prove Challenging for the Incumbent

President Obama and Mitt Romney are tied with Registered Voters, according to a recent analysis of the latest American Pulse™ Survey (APR-12, N=3,666). If the election were held today, 39.7% would cast a ballot for the incumbent, while 39.3% would choose the challenger. Romney has a slight edge among Likely Voters with 41.5%, compared to 40.8% for the President.

In what’s expected to be a closely contested battle, the key to the election will likely be Undecided Voters. Studies have shown that typically those who haven’t made up their mind break for the challenger, making President Obama’s bid for re-election more difficult. According to the analysis, 21% of Registered Voters are undecided and this voter group appears to be dissatisfied with the current state of the union. They are overwhelmingly unhappy/very unhappy with the government (71.8%) and they believe the economy is heading in the wrong direction (68.4%).

Undecided Voters identify the weak economy (20.9%) as the #1 problem currently affecting the U.S. followed by unemployment (16.9%) and national debt (16.1%). Although Undecided Voters aren’t sure if Romney would handle these issues “well,” they appear to believe he could do better. Respondents were asked to rate how they thought Romney would do if elected President regarding the top problems. When comparing those who said either good or excellent to those who said President Obama has handled them in the same regard, the indices fall in the Republican’s favor.

With Undecided Voters tending to believe Romney could do a better job handling major U.S. problems, re-election could be a problem for Mr. Obama.

American Pulse™
The American Pulse™ Survey is collected online twice a month covering topics such as politics, pop culture and the economy. 3,666 respondents participated in the 2nd April American Pulse conducted 4/23-4/30/2012. Margin of error is +/- 1.6%. http://www.biginsight.com