4,185 respondents participated in the 2nd February American Pulse conducted 2/27-3/5/2012, utilizing BIGinsight™ and reInvention survey panels. The latest results show that Generation Y is most likely to adopt alternate transportation methods as the price of gas increases. Also, nearly half of all consumers are altering their vacation plans as a result of high pump prices. 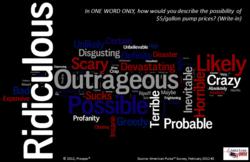 One Word on $5/Gallon

Gas prices are expected to heat up this summer due to a variety of factors. With oil prices rising, talks of war with Iran in the news, and Americans marking their calendars for summer vacations, it is no surprise the majority is preparing to spend more to top off the tank. 71.3% of Americans think it is somewhat or very likely that gas prices will hit $5/gallon by Memorial Day, according to the latest American Pulse™ Survey, and Americans aren’t too happy about the situation. The top 3 words Americans used to describe the possibility of such high pump prices are Ridiculous (6.6%), Possible (4.3%) and Outrageous (4.0%). Likely, Horrible, Crazy, Scary, Terrible, Probable and Bad finish out the top 10. Notably, members of Generation Y were nearly 3 times more likely than Adults 18+ to say $5/gallon is “Expensive” (3.3% vs. 1.2%).

Further, consumers in Generation Y are more likely than older generations to carpool, walk, cycle or utilize public transportation as a result of high gas prices. Gen Y scored 113.07 on an index showing the propensity of each age group to consider alternative forms of transportation as gas prices approach $5/gallon, meaning they are 13% more likely than the average population to drive less as pump prices rise:

Generation X appears the least likely to adopt alternate forms of transportation. For some, increasing gas prices may not be influential, but current life situation is most likely the leading factor creating the need for a car.

“Members of Gen X are likely at high points in their careers and have children to transport to and from extracurriculars,” said Dianne Kremer, Senior Analyst at BIGinsight™. “The necessity for a vehicle is causing them, along with consumers of all ages, to cut back in other areas, like taking fewer shopping trips, searching for sales and sticking closer to home. Nearly a half plan to cut back on vacation plans this year as well.”

Pump prices are causing many consumers to pause from packing their bags--46.8% say the cost of fueling up will affect their vacation plans in 2012. Of those rerouting, 39.2% say they won’t be taking a vacation at all this year while 3 in 10 (31.5%) plan to cut back on other parts of their travel budgets (cheaper hotels, fewer days of vacation, etc.). 29.1% won’t be traveling as far as originally planned and 23.7% are planning a staycation. Staycations are the most popular among Gen Y (27.2%) while Boomers are more likely to not be taking a vacation at all (43.8%).

Be sure to check out the BIG Consumer Blog for the top vacation destinations in the United States (gas prices aside): State Superlatives: Dreamiest Destination, Finest Fare, Best Bet for a “Rerun” + more

American Pulse™
The American Pulse™ Survey is collected online twice a month covering topics such as politics, pop culture and the economy. 4,185 respondents participated in the 2nd February American Pulse conducted 2/27-3/5/2012. Margin of error is +/- 1.5%. http://www.biginsight.com