After much anticipation, Scotty Sanders’ book “Quest of the Keys” officially releases on September 1, 2012. "Quest of the Keys," is about the brave protagonist Decklen who sets out to find the keys to success amid danger and unexpected challenges. The young adult fiction story which infuses leadership principles and character development is Sanders’ sophomore release. Educational institutions are getting behind this unique book and it is being used as curriculum in about 70 schools this Fall. For more information, go to QuestoftheKeys.com. 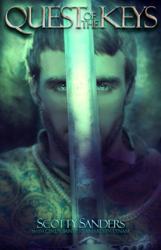 "Quest of the Keys" by Scotty Sanders

“I believe young people are looking for a cause in which to believe. And since today’s generation is very ‘story-driven,’ I have crafted an adventurous saga that also conveys purpose, meaning of life and success principles.”

After much anticipation, “Quest of the Keys” officially releases on September 1, 2012. "Quest of the Keys," is about the brave protagonist Decklen who sets out to find the keys to success amid danger and unexpected challenges. Author Scotty Sanders, who has been teaching leadership principles in corporate and church settings for over 25 years, is now taking his principles to young adults through creative writing. “It is my passion to encourage and empower the next generation to live well,” says Sanders. “I believe young people are looking for a cause in which to believe. And since today’s generation is very ‘story-driven,’ I have crafted an adventurous saga that also conveys purpose, meaning of life and success principles.”

“Quest of the Keys is based on teachings of Sanders entitled “The Eight Keys to Success.” It was Sanders’ co-author, Kevin Lynam, who first suggested that these principles could be put into narrative form as a book. Sanders states, “I have always been a fan of fantasy fiction. Considering the popularity of this genre with “Harry Potter,” “Twilight,” and “A Game of Thrones,” it seemed a likely direction for this work.”

Even before its release, ‘Quest of the Keys’ has received overwhelming reviews and endorsements, including educators, media, culture leaders, pastors and more. “Like a work from Og Mandino, this is a well-told story that pushes the limits of what one usually expects of a fantasy fiction novel,” says Richard Paul Evans, #1 New York Times Bestselling Author of “The Christmas Box” and “Michael Vey.”

There is a particularly strong support of “Quest of the Keys” from educational institutions because of its promotion of personal development, continuous learning, responsibility, leadership development, integrity, honor and purpose. The book is being used as curriculum and/or required reading in about 70 schools this Fall. The hope is to expand its reach in the class room as well as move into church youth groups—supplementary curriculum materials are currently being developed for both schools and churches.

Scotty Sanders recently celebrated the upcoming release of his new book with a national book launch event in West Monroe, Louisiana and a local event in Dallas, which had a combined attendance of close to 500 people including media, marketing and educational partners, as well as family and friends.

“Quest of the Keys” is a story of Decklen who has narrowly escaped death in the Minca Silver Mines, and sworn to return to those he left behind. Joined by an unlikely sojourner, he sets out for the majestic realm of Leonesse, and assistance from the elder Octavius. But rather than finding swords and strategy, Decklen receives a locked golden cylinder containing an ancient scroll. Tasked with opening the scroll, Decklen and his companion find themselves on an unexpected path of danger and discovery, in search of hidden keys that unlock the true secrets to success... and determine the fate of an entire kingdom.

A cinematic 3D animated book trailer was released earlier this year as a part of the marketing campaign for "Quest of the Keys." It was produced by film producer Cheryl Ariaz Wicker (“Flag of My Father”) who also owns Premier1 Studios, an entertainment media and marketing company. The original animation was created by Paul Eckhardt. The video has since been viewed by many thousands of people around the world.

“Quest of the Keys” will be available on http://www.questofthekeys.com, Amazon, and BarnsandNoble.com beginning September 1, 2012.

ABOUT SCOTTY SANDERS
Entrepreneur, leadership consultant, life coach, ordained minister and author Scotty Sanders is very passionate in sharing God’s good news to everyone. Formerly a CEO of a multi-million dollar company, he also held pastoral roles in two mega churches. Scotty Sanders is the founder of Life Catalyst Consulting. Sanders’ first book “ONE Focus Living” was a highly successful book in the Christian community. With his work in “Quest of the Keys,” he now adds fiction for younger audiences under his repertoire. Scotty was born and raised in Louisiana but now makes his home in Dallas, Texas with his wife Cindy. They have two married children and four grandchildren.