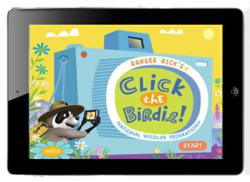 We want to use electronic devices to educate kids and stimulate curiosity about the natural world so kids can take what they have seen or learned virtually out into the real outdoors.

Raccoons are among the most adaptable of all animal species, and the National Wildlife Federation’s (NWF) raccoon mascot, Ranger Rick, is showing his adaptability as he enters the digital world. For over 40 years, Ranger Rick magazine has entertained and educated generations of children about the wonders of nature. Now NWF is introducing game apps for kids so they can continue to have fun while learning about wildlife and wildlife habitat in a new delivery platform.

“National Wildlife Federation knows kids are into their electronic devices,” said Mary Dalheim, Editorial Director of Children’s Publications for NWF. “We want to use those devices to educate kids and stimulate curiosity about the natural world so kids can take what they have seen or learned virtually out into the real outdoors.”

The apps are available for playing on iPad, iPhone, iPod and other devices. Each one comes with a free abbreviated version; full versions cost 99 cents to $1.99. All proceeds from the sale of these apps goes to support National Wildlife Federation’s conservation work to protect wildlife and wildlife habitat.

Raiders of the Lost Aardvark – for kids 7 and older - The action never stops in this thrilling game of mystery and mummies. Archaeologist Jack Snare has just discovered a rare mummified aardvark. But en route to the Natural Science Museum in Africa, Snare’s precious new find is stolen! Kids join Ranger Rick to track down clues to solve the mystery of the missing aardvark. On the adventure, kids visit different habitats all over Africa including a savanna, a rainforest, highlands, and the site of a mighty waterfall. They meet the awesome wildlife that live in these habitats and learn interesting trivia about plants and animals. (Available for iPad, iPhone, iPod Touch.)

Click the Birdie – for kids 7 and older – In this game, kids become star nature photographers as they travel with Ranger Rick to six wild habitats across the United States including a Cypress Swamp, Arizona desert, and the Hawaiian islands. In each habitat children put their camera skills to the test by snapping pictures of fast-flying birds.

Players score points, learn amazing wildlife facts and are encouraged to go outside to photograph the birds and wildlife in their yard and community. This approach is similar to that taken in Ranger Rick magazine where kids are given activities to help them explore the wildlife where they live. In this way kids go from being passive learners/players to active nature explorers. (Available for iPad.)

Kara Marie L, age 10, says “I LOVE it! It’s a fantastic game. I didn’t even know that Hawaii was home to an endangered bird.”

Matthew S, age 11, says “This game is awesome! It’s educational, funny, and has a perfect amount of challenge. All in all, this game is very cool.”

What Did Snakey Eat? – for kids ages 2 to 5 – In this irresistibly silly game, pre-schoolers help Sammy the Skunk figure out what his friend Snakey ate by matching the shape in Snakey’s belly to one of the suggested objects. Did he eat an umbrella? A tricycle? Or even a giraffe? The game provides instant mobile fun that will captivate kids imaginations, fine-tune their visual recognition skills, and might even make them wonder what real snakes eat. Available for iPad, iPhone, iPod Touch - coming soon on other devices.

Michele says, “My 4-year-old absolutely loves this game app. She squeals with delight every time a new object appears in Snakey’s belly!”

Hannah says, “My 4-year-old loved Snakey from the start. The best part for me was watching him sit on the bed with his 2-year-old sister, letting her answer the questions while he operated the game for her. I’ve never seen them share so well!”

To start your wildlife adventure on NWF’s apps go to http://www.nwf.org/kidsapps.

“National Wildlife Federation’s Be Out There campaign is all about getting kids outside and connecting with nature, but sometimes that outdoor adventure needs to start inside,” concluded Dalheim. “These apps can provide an introduction to the world of nature and inspire kids to get outside to check out the real thing.”