200 years of biblical scholarship has been withheld from lay people, argues renowned bishop and social activist John Shelby Spong. In this brilliant follow-up to books like Eternal Life and Jesus for the Non-Religious, Spong reveals not only the crucial truths that have long been kept hidden from the public eye, but explores what the history of the Bible can teach us about reading its stories today and living our lives for tomorrow. 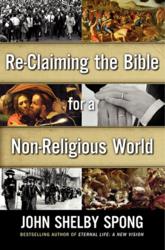 Building on longstanding traditions in the academies of Christian learning, Spong brings a fresh perspective to common misconceptions about the Bible.

The claim that the Bible is the “Word of God” in any literal sense violates every rational faculty that human beings possess, says John Shelby Spong, the retired Episcopal bishop and pioneer of progressive Christianity. “Irrational, and at least in scholarly circles, universally dismissed attitudes toward the Bible still have power today, and play a large role in America’s national life,” Spong says. In Re-Claiming the Bible for a Non-Religious World (HarperOne, $28.99, November 8, 2011), he attempts to end the tyranny of “uninformed biblical nonsense.”

The problem, Spong says, is that very little biblical scholarship has trickled down to people in the pews. A longtime champion of critical engagement with Scripture, he brings a deep love of the Bible to his efforts to guide people beyond a Sunday school-level understanding of the texts. “I am not the enemy of the Bible. I am the enemy of the way the Bible has been used,” Spong says.

Building on longstanding traditions in the academies of Christian learning, Spong brings a fresh perspective to the following misconceptions about the Bible:
•The opening Bible stories from Adam and Eve through the flood have no connection with history, “despite the fact that some of the world’s more foolish people still go on expeditions trying to locate Noah’s Ark on Mount Ararat”;
•Moses did not write the documents we call the “Books of Moses” or the Torah;
•The gospels were not written by eyewitnesses;
•Miracles do not enter the Jesus story until the eighth decade;
•The virgin birth is a ninth-decade addition;
•The book of Revelation does not predict the end of the world or convey any hidden     messages about modern day history.

Spong, a scholar, pastor, priest, and bishop, has made a life’s study of the Bible. He studies the Bible daily.

In Re-Claiming the Bible for a Non-Religious World, he explores the origins of the Bible and the essential message of each of its books, showing how the sense of God developed over the centuries. He guides readers book-by-book through the Old and New Testaments, providing the historical and cultural context and illuminating the metaphorical and mythological flourishes.

He reveals the many profound truths to be found beneath the literal words of the text. For example, the Book of Ruth “provides us with a biblical mirror into which we can stare at our own prejudices and be led to free ourselves of them,” Spong says. Another is II Isaiah, a remarkable book that presents “a new breakthrough in human consciousness. Here in the words of this unknown sixth century BCE person we see a portrait of human life that has transcended the survival mentality of our evolutionary past.”

“Embrace the truth found in the biblical wisdom literature, savor it and transform it into the symbols of your own experience. That is finally the only way to read this ancient, sacred, and mythological book we call the Bible.”

JOHN SHELBY SPONG is the author of more than twenty books that have sold over a million copies. He was an Episcopal bishop for more than 24 years. During his career he has lectured at more than four hundred colleges and universities around the world including Cambridge and Harvard. In 2010, his portrait was commissioned to hang in the Hall of Honor at the Martin Luther King Jr. International Chapel at Morehouse College in Atlanta with other civil rights movement leaders for his work as a champion of justice. He lives in New Jersey with his wife, Christine, who also serves as his editor and manager of his career. Visit him online at http://www.JohnShelbySpong.com.