RMC, the largest privately owned destination management and special events company in the U.S., was recently designated as one of the Top 25 Destination Management Companies by Special Events magazine. This prestigious global recognition adds to the list of awards and accolades for this $15-million company, established in 1988 and based in Aspen, Colorado. 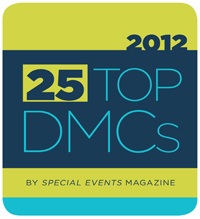 It is gratifying beyond words to be recognized alongside the top DMCs in the world...

RMC, a longstanding destination management and special events company with seven operations in California, Colorado, Nevada, Utah and Wyoming, was recently recognized among global leaders in destination management. With $15 million in annual revenues, RMC earned a spot in the Top 25 Destination Management Companies (DMCs) distinction, an annual ranking running eight years now in Special Events magazine that is awarded on the criterion of top revenues in the industry.

"It is gratifying beyond words to be recognized alongside the top DMCs in the world," says Nathan Boyd, president of RMC. "Our focus and discipline over the past two and a half decades has been to deliver exceptional guest service and creative execution of luxury high-end meetings and events, in premier resort destinations in the West. It's a formula that has worked well, and we're thrilled to be acknowledged for it in this competitive industry."

RMC has offices in Aspen, Colorado Springs, Denver and Vail, Colo.; Jackson Hole, Wyo.; Park City, Utah; and Lake Tahoe, Calif./Nev. It is the preferred in-house destination management provider for The Ritz-Carlton, St. Regis, Montage, Westin and Four Seasons properties in the destinations where they do business. Other DMCs in the top 25 ranking by Special Events magazine included global consortiums based in international cities such as Singapore, Beijing and Zurich. Domestic DMCs were represented in major metropolitan areas like Los Angeles, New York, Las Vegas, Orlando and Dallas.

"RMC is well-positioned to continue to excel on a national and global level with our top-notch staff in place in our seven business locations," says Shawn Thomson-Palermo, owner of RMC. "With strong bench strength and hundreds of strategic provider partnerships, we have the know-how to continue to serve our longstanding clients with the level of service and detail they have come to expect." RMC manages 300 to 350 events per year, and a partial list of clients includes AT&T, Citigroup, Citibank, ESPN, Ford Motor Company, HBO, Honda, Lexus, Mercedes, Merrill Lynch, Pfizer, Time Warner and the Walt Disney Company.

In addition to its recognition from Special Events magazine in July 2012, RMC was awarded a 2012 Best of State Medal for destination management in the hospitality, travel and tourism category in Utah's statewide awards in May. Other awards and accolades of note, from a long list, include:

RMC, a destination management company that began in 1988 in Aspen, Colorado, now has seven divisions operating in the western United States.