A CNN/Opinion Research poll conducted after the debate showed 67% of viewers thought Romney won the first debate of the 2012 presidential election on Wednesday, whereas only 25% percent thought President Obama was the victor. For those who keep score, Crooked Brook is offering “Romney 1 - Obama 0” t-shirts. 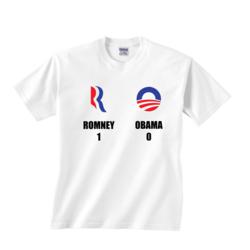 A CNN/Opinion Research poll conducted after the debate showed 67% of viewers thought Romney won the first debate of the 2012 presidential election on Wednesday, whereas only 25% percent thought President Obama was the victor. In addition, a poll conducted by CBS showed that 46 percent of undecided voters thought Romney won, compared to the 22 percent who thought Obama won.

It was obvious to everyone; Obama did not bring his “A” game.

Even Bill Maher, one of the President’s strongest supporters who has donated $1 million to the biggest pro-Obama "super political-action committee" tore into Obama’s performance on Twitter: “i can’t believe i’m saying this, but Obama looks like he DOES need a teleprompter”.

For those who keep score, Crooked Brook is offering “Romney 1 - Obama 0” t-shirts for $18.00 each; volume discounts are available.

Although the most popular method of printing t-shirts is screen printing, Crooked Brook t-shirts are printed using Direct To Garment Printing (digital garment printing or DTG) which is the process of using inkjet printers to print an image directly onto t-shirts without the use of screens like with screen printing, which requires a lot of setup e.g., creating screens for each color. In addition, DTG printing uses eco-friendly, water soluble ink, unlike some screen printing methods that layer Plastisol (a suspension of PVC particles in a plasticizer) on top of the t-shirt. The only requirement for DTG printing is for the image to be high resolution, resulting in photograph quality printing with no setup fee or minimums for custom t-shirts.

Crooked Brook is a unit of the atelier division of an art studio that offers full service apparel design, pattern making, sample making, private-label small lot production, direct-to garment printing and embroidery. Since 1989, they’ve built a strong reputation of providing top-notch apparel designs, patterns, fit and production samples for many brand name catalogs and retailers, as well as wardrobe and costumes for movies, television and theater.
All Crooked Brook branded garments and accessories are proudly made to order in the U.S.A.

With a design studio in New York City, (the fashion and gastronomic capital of the world) and a production facility in Utica, New York, they’ve garnered international brand name recognition as the maker of the “World’s Highest Quality Chef Jackets™”.