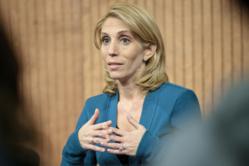 It is clear that Dana Bash is tainting coverage of this election and deserves a reassignment, call CNN right now at 404-827-1500 and demand it.

On-air comments made by CNN Senior Congressional Correspondent Dana Bash January 2 are being flagged by Revolution PAC for strong personal bias. In the statements, made on the eve of the Iowa Caucuses on “John King USA,” Bash noted her concern about the success of one particular Republican presidential candidate, U.S. Rep. Ron Paul, who is currently polling in strong second position in the Granite State.

“I’m sure you talk to Republicans who are worried as well, just like I am,” Bash offered from New Hampshire, “that Ron Paul will continue on long into the spring and summer … He could really hurt whomever the Republican nominee is because, still, nobody thinks, even if he does well here in New Hampshire, that he will ultimately be the nominee.”

“In America, voters rely on the media to provide objective reporting,” says Revolution PAC Chair Gary Franchi. “Editorializing like this obviously influences public perception and has no place in a hard newscast.”

“Dana Bash’s statements are particularly disturbing,” Franchi continues, “because they fly in the face of established facts. General election polling consistently shows that Ron Paul – because of his unmatched appeal to independent and disaffected democrat voters – is the only viable candidate against Barack Obama.”

Franchi concludes, “It is clear, when the Paul Camp has to end interviews early with her, that Dana Bash is tainting coverage of this election and deserves a reassignment, call CNN right now at 404-827-1500 and demand it.”