The Bahamas has seen a recent surge in professional athletes purchasing properties for its proximity to the United States, tax benefits and year-round temperate tropical weather. Athletes and celebrities are coming in droves to discover the peace and quiet of The Bahamas. 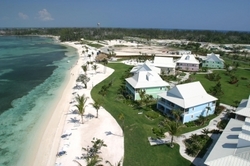 Many athletes love fishing, scuba, boating and other water sports. Rum Cay has it all

The Bahamas has become a prime destination for professional athletes from the NBA, NFL, Major League Baseball and other leagues and sports to call home. The Paradise Is Mine Company, a global real estate marketmaker, has developed a program to provide discounts to current and former athletes up to $100,000 off its projects in The Bahamas. The close proximity to the United States, English as its official language and its currency being pegged to the US dollar make the island nation a very attractive home for athletes and celebrities from around the world

Many athletes are purchasing second homes, winter homes and retirement homes in this picturesque island nation. The year-round tropical temperatures, its accessibility and significant tax advantages are also cited by many as the primary reasons for the sudden migration. Many athletes and their families are discovering what Michael Jordan, Barry Bonds, Clyde Drexler, Ray Lewis and Ernie Els have long since come to know.

Rum Cay, a lush, tropical, picturesque destination in the southern Bahamas, in particular, has been recently been pinpointed as the new locale for athletes and celebrities alike. Located 180 miles from the mainland United States, just off the southern coast of Ft. Lauderdale and Miami, the island has become a favorite for current and former athletes looking for peace and quiet. Rum Cay is widely considered one of the most beautiful Bahamian islands and is located on the continental shelf. It is known for its serenity, picturesque vistas, beautiful salt water ponds and spectacular fishing. Recently, there has been a tremendous surge of pro athletes and celebrities who have acquired real estate on this 40 square mile island. Rum Cay’s landing strip provides for commercial and private airlines to land and is just off the beaten path providing them the freedom to enjoy their hobbies in relative obscurity.

Paradise Is Mine is at the forefront of the gaining popularity of Bahamas real estate amongst celebrities and non-celebrities alike. Its promotion has been so successful that the company has considered the creation of a “Pro-style Athletes Village”. Prices for lots range between $450,000 and $1,000,000 US dollars which is significantly less expensive than US and other Caribbean alternatives. Paradise Is Mine is known for naming streets after some of its famous athlete property owners.

George Washington once called the islands of The Bahamas “the isles of perpetual June.” On top of the founding father of the United States, Royal Families and the heads of state including Prince Charles, Prince Edward and the late Lady Diana frequently visited The Bahamas. Notable celebrities such as Shakira, Johnny Depp, John Travolta and Oprah Winfrey live or have homes in The Bahamas and take advantage of its preferential tax benefits. Canadian buyers have found Rum Cay particularly appealing given the tax advantages provided to its citizens.

“Many athletes love fishing, scuba, boating and other water sports. Rum Cay has it all,” states Yul Frenkhal. “Many of my celebrity buyers seek anonymity, peace and quiet. Rum Cay and other outer Bahamas islands provide them just that,” Frankhal continued. Frenkhal is a private celebrity realtor based in London who has developed an international private clientele of celebrities and athletes from around the globe.

Frenkhal points out that “many athletes have been relatively unaffected by the economy and can take advantage of the low real estate prices while they are still available. I would imagine that it would be appealing for them to live with like minded people. Now that LeBron James is in Miami, it would not surprise me to see him live like a king with a place in The Bahamas too. It’s just so close and so beautiful. How fitting would that be? It just makes sense.”

Paradise Is Mine, Rum Cay Bahamas

Rum Cay Bahamas, Paradise Is Mine

Paradise Is Mine, Rum Cay Bahamas

Rum Cay Bahamas, Paradise Is Mine