Scott Chism & The Better Half has been performing their Americana/Folk/Bluegrass/Old Country style since 2008, and they have finally released their long-awaited debut album "Long Haul Steady." 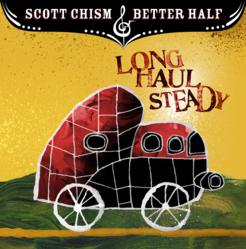 Scott Chism & the Better Half

Rooted in the foothills of the Appalachian Mountains, their back porch poetry with its humor and old southern morals is set to a blend of Americana, Folk and Bluegrass that inspires as it entertains. -Sam Miller; Blue Healer Music

Scott Chism & The Better Half has been performing their Americana/Folk/Bluegrass/Old Country style since 2008, and they have finally released their long-awaited debut album "Long Haul Steady." Based in Mississippi, the group (led by Scott Chism and Lynsey Terry) has shared the stage with acts like Danny Barnes, Grayson Capps, Shannon McNally, Kenny Brown, and many others. With everything from upbeat, fast-picking tunes to soft, heartfelt ballads, Scott Chism & The Better Half has strong musical influences of Bob Dylan, Emmylou Harris, The Band, and Gillian Welch.

"Long Haul Steady" is a collection of clean-cut country and folk with a rough bluesy edge. Tracks like “Hand Me Down Blues” and “Keep Bearin’ Down” have that classic Americana sound, with conversational lyrics and a southern twang. The title track, “Long Haul Steady,” is full of soul and emotion, where Chism sings “can you help me remember how to pray, cause I can’t make that long haul without you, I just need a steady hand to point the way.” Scott Chism’s writing has something for every kind of country/folk lover.

You can learn more about Scott Chism & The Better Half at http://www.scnbetterhalf.webs.com.

If you have any comments or would like to set up an interview, please contact Melissa Zeigler: melissa(at)powderfingerpromo(dot)com.