In his new book, Perfectibilists: The 18th Century Order of the Illuminati, author Terry Melanson puts a human face on the legendary secret society, which has been the object of more wild speculation than any other group over the past two hundred years. 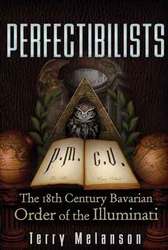 Who was the fool, who the wise man, beggar or king? Rich or poor, all are the same in death.

The secret society known as the Illuminati is the semi-fictional bad guy in the new Ron Howard film Angels & Demons, from Dan Brown's novel of the same name, with Tom Hanks reprising his role of sleuth Robert Langdon in the 2006 blockbuster, The Da Vinci Code.

In his new book, Perfectibilists: The 18th Century Order of the Illuminati, author Terry Melanson puts a human face on the legendary secret society, which has been the object of more wild speculation than any other group over the past two hundred years.

Translating many books and original documents into English for the first time, Melanson traces the origins and subsequent diaspora of this fabled cult in encyclopedic detail, including thumbnail biographies of over 400 confirmed members, hundreds of illustrations, and actual mission statements written by the Order's inner circle.

First calling the new cult "Perfectibilists," to reflect his philosophy of perfecting the faculty of enlightened reason, founder Adam Weishaupt soon decided the word was too obscure, and adopted the name by which it has been known ever since: The Illuminati

"I have foreseen everything, and I have prepared everything. Let my whole order go to rack and ruin; in three years I will answer to restore it, and that to a more powerful state than it is in at present... I shall rise stronger than ever... I can sacrifice whole provinces, the desertion of a few individuals, therefore, will not alarm me."
--- Adam Weishaupt, 1782.

Sharing many adherents with the Freemasons, the Order was active in Bavaria from 1776 to 1786, when it was suppressed by the government, and many members were forced to emigrate to more sympathetic political climes. They then proceeded to infiltrate the highest cultural and political circles in Europe, heavily influencing the era's revolutionary fervor that led to the fall of the ancient monarchies, leaving a legacy that still plays a pivotal role in the dynamics of our modern world.

"....all the Lodges are summoned to confederate together, to unite their efforts to maintain the Revolution; to gain over it, in all parts, friends, partisans, and protectors; to propagate the flame, to vivify the spirit, to excite zeal and ardor for it, in every state, and by every means in their power."
--- circular to all Lodges from the Grand Orient in France, signed by the Duke d'Orleans, C. 1789.

Melanson also documents the direct adoption by Yale's Skull & Bones cult of Illuminati rituals and methods of manipulation, which formed a virtual blueprint for the creation of secret societies.

"Who was the fool, who the wise man, beggar or king? Rich or poor, all are the same in death."
--- Slogan above a painting of skulls surrounded by Masonic symbols which hangs in Skull & Bones' sacred room 322, was lifted directlyfrom a Illuminati initiation ceremony.

A welcome addition to anyone's library, Perfectibilists: The 18th Century Order of the Illuminati, is a chronicle of the Age Of Enlightenment, and the eclectic characters who embodied it. The record of this fascinating group's actual activities demonstrates that the true story is often, indeed, stranger (and scarier), than fiction.

Terry lives in Moncton, New Brunswick, Canada and is the owner/operator of the popular Internet site, conspiracyarchive.com.