On Friday, April 12th, 2013, the University of South Florida named SecurTest, Inc., the second fastest growing bull-owned or bull-led business. More than thirty years after its founding, SecurTest continues to rank as one of the nation’s leading background screening companies. 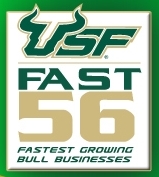 Steven and Christine Robinson Millwee founded SecurTest, Inc. in 1978. Both alumni majored in criminology while attending the University of South Florida.

“After spending almost five years with the Hillsborough County Sheriff’s Office and two years with the FBI, I had planned a career in law enforcement,” said Steve Millwee, CEO of SecurTest, Inc. “One of my professors, Hal Vetter, Ph.D. encouraged me to develop a special research project during my internship under his mentorship. His encouragement, along with the solid education from other faculty, was the genesis of starting the company the same day I graduated from USF on August 21st, 1978.”

“Dr. Judy Genshaft, the president of USF, has assembled world-renowned professors, researchers, and faculty and has given them the latitude and tools to make USF one of the highest ranked public universities in the U.S.,” continued Millwee.

SecurTest, Inc. originally started as a consulting firm for law enforcement agencies and attorneys. In 2011, the Millwee duo took their company to another level after developing the only patented background screening system, iReviewNow.

Since its introduction to the industry, iReviewNow has quickly become the de facto standard for accuracy and legal compliance in regards to hiring actions and investigations. This system mitigates growing risks in mounting FCRA Federal lawsuits and has been used by the military, the Department of Homeland Security, and various other branches of the U.S. government.

Ernst & Young independently ranked the USF Fast 56 by percentage of cumulative annual growth in sales or revenue (net of returns) from January 1, 2009 to August 31, 2012. Companies had to meet all three criteria: (1) Business must have been in operation for a minimum of 36 months; (2) Business must have verifiable revenues of at least $250,000 for the most recent 12-month period; and (3) Business must be owned or operated by a former USF student that either owns 50% or more of the company, served as the chief executive, or founded the company and was a member of the most senior management team.

SecurTest was unique in that both of its founders met each of the three criteria. Steve Millwee is a frequent expert witness in background screening, negligent hiring, high profile murders, workplace violence, and negligent security and hiring cases. He has authored two books, two movie screen plays, and over 330 employment tests, along with his iReviewNow patent. He was the president of ASIS International in 2002, which is the largest professional society for security executives and professionals.

“As our CFO, Christy has been the financial genius who has allowed us to organically grow SecrutTest. Strong financial leadership, knowing when to maximize opportunities and mitigate risks and knowing how and when to make mission-critical financial decisions in any economic climate has allowed us to give back to our Alma Matter, communities, and others,” Steve Millwee.

In addition to receiving USF’s FAST 56 award, SecurTest was also recently named the number one background screening provider by HRO Today, based on independent customer service satisfaction surveys as well as the breadth and growth of the company.

About the University of South Florida

The University of South Florida is a high-impact, global research university located in beautiful Tampa Bay on Florida's spectacular west coast. It is one of the largest public universities in the nation, and among the top 50 universities, public or private, for federal research expenditures. The University of South Florida is one of only four Florida public universities classified by the Carnegie Foundation for the Advancement of Teaching in the top tier of research universities, a distinction attained by only 2.3 percent of all universities. USF serves more than 47,000 students. Please visit http://www.usf.edu for more information about USF.

Since 1978, SecurTest has been the leading provider of accurate background reports and biographical questionnaires, both of which give employers the facts they need to make wise hiring choices. iReviewNow helps identify quality applicants, employees, vendors, government clearances, and consumers, while helping companies mitigate risks and navigate challenging EEOC and FCRA regulations. For more information on iReviewNow, please visit http://www.securtest.com or call 800-445-8001. Follow us on Twitter and Linkedin or Like us on Facebook.