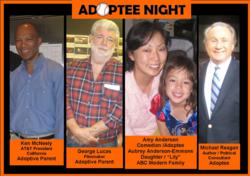 The Giants have taken a giant leap for Mixed Roots and adoptees in general by recognizing our adoptee community and providing a forum to be heard and seen on the big screen.

For the first time, the Mixed Roots Foundation in community partnership with the San Francisco Giants will debut its star studded public service announcement (PSA) that will raise awareness of the adoption experience at the newly established 'Adoptee Night ' taking place on Tuesday, July 24, 2012 at AT&T Park in San Francisco, CA. The PSA will broadcast to over 35,000 fans highlighting various stories of adoption.

“As part of our mission, we are very excited for this opportunity to work with the SF Giants to share our stories of adoption on a national and global level, stated Maria Wren, Korean adoptee and Chair of the Mixed Roots Foundation. “The Giants have taken a giant leap for Mixed Roots and adoptees in general by recognizing our adoptee community and providing a forum to be heard and seen on the big screen. We look forward to our continued work with them –Go Giants!”

The Mixed Roots Foundation’s PSA will feature various individuals touched by adoption including filmmaker George Lucas, who is an adoptive parent of three children. He will share what it was like to adopt as a single parent and how adoption has positively impacted his life. Michael Reagan, adopted son of former president Ronald Reagan and actress Jane Wyman will make a call to action for the public to help identify positive role models and streamline more post adoption resources for adoptees and their families. Ken McNeely, AT&T President of California will share his unique adoption story of being gay and adopting and raising along with his same sex partner two young mixed African American children in SF. Finally, Amy Anderson, a comedian who was adopted from South Korea who grew up in Minnesota and her daughter Aubrey Anderson-Emmons who plays “Lily” on ABC’s Modern Family will share their experience of being a mother daughter dynamic duo and how Amy is attempting to pass her story of adoption onto her own biological daughter, Aubrey.

The goal of 'Adoptee Night ' will to embrace and celebrate all people who have been touched by adoption and ultimately replicate this special event to other sports teams across the country. A portion of all 'Adoptee Night ' ticket proceeds will benefit Mixed Roots Foundation whose mission is to promote and support organizations that serve as a resource to the adoptee community, create more awareness of the adoption experience, and inspire the next generation of adoptees through mentoring, scholarships, grants as well as help offset costs of DNA testing.

The SF Giants will play the San Diego Padres at 7:15 p.m. with a separate pre-game gathering at 4:30 p.m. at Lucky Strike across from AT&T Park. To buy tickets, please call 415.972.2298 or visit sfgiants.com/specialevents. To learn more about Mixed Roots Foundation, please LIKE Mixed Roots Foundation on Facebook, call 800.659.6958, email events(at)mixedrootsfoundation(dot)org, or visit mixedrootsfoundation.org.