Shade, female Reggae artist from Jamaica has been promoting, and performing in Okinawa, and Mainland Japan for about one year now. Her fans are very excited about the new style of Dancehall Reggae that she brings to the Japanese culture. Shade album releases in all major outlets in Japan January 19th 2011 Tsutaya, HMV, Tower Records and more. The self title album "life in the SHADE" feat Junior Reid, Macka Diamond, Calton Coffie, Lady G, U-Duo & Platy, and is expected to be well received in Japan. 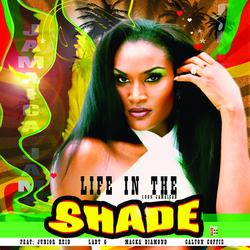 "Life in the SHADE" album cover

The joy, pain and strength of a woman

Shade, female Reggae artist from Jamaica has been promoting, and performing in Okinawa, and Mainland Japan for about one year now. Her fans are very excited about the new style of Dancehall Reggae that she brings to the Japanese culture.

For many years Music has been a large part of the Japanese culture. It is largely integrated in the day to day lifestyle of the modern Japan. Reggae, Rock, Jazz, Hip Hop and even Swing Dancing can be found in many cities across Asia. Japanese people love everything about fashion and International trends, so when we focused on a particular genre such as Reggae. We found that not on the music was being adopted but also the lifestyle, which entails the dressing, the food and even the Patois language which is native to Jamaica. There are many Eateries such as Flex Bar & Grill in Chatan, Okinawa. Clothing and accessory stores like Afro Jamaica, as well as Music Shops notable Daddy P's Blue Beat Reggae Record Shop; long time veteran in Reggae Muisic in Okinawa Japan selling Vinyl Record in Sunabe. In addition, there are many Jamaicans living in Japan. A lot of whom caters to the Reggae loving audience across Asia. So it's was no surprised that when Shade, the 6' tall Jamaican Female Reggae Artist and Model landed in Japan, she was on her way to making a unforgettable name for herself.
"Life in the SHADE" album cover

Shade is an International Model and Recording artist, has been performing in Okinawa, and Mainland Japan for about one year now. Her Album "Life in the Shade" is scheduled to be release in Japan January 19th 2011.
In the past there have been many Dancehall Reggae musicians that have gotten enormous attention in the Japan market. Such as, TOK, Sizzla, Shaba, Sean Paul and more, but this is the first time that a Female Jamaican Reggae/Dancehall Artist and Model has broken through the clutter, and is making a name for herself physically in Japan.
The joy, pain and strength of a woman

One would think that a cultural barrier such as the Japanese Language would deter the aspirations of a new comer to the Asian Community. On the contrary; it has made a very large impact in Shade's life. When we spoke to her we could see how humbled she was by the knowledge of how loved she is in Okinawa; and how fast her fan fair was growing in Mainland Japan. Her fans are very excited about the new style of Dancehall Reggae that she brings to the Japanese culture. Her music can be heard in the Clubs and her name on the lips of every Japanese DJ.
"Life in the Shade" features an array of Top Industry Acts, such as Junior Reid former Lead Vocalist for Blacker Uruh, Calton Coffie kwon for "Bad Boys Bad Boy" and "A la la la la long", and who was the formely Inner Circle's Lead Singer, Lady G, long time Female Reggae Artist, kwon for her hit single "Nuff Respect" and Macka Diamond, Danchall Diva who mash up the stage with songs like " Hula hoop" and "Dandie Shandy".

Currently the "Life in the Shade" Japan tour is underway; Shade has invited the Female crew off her album Macka Diamond and Lady G along with Specialist from Jamaica to Japan. In an effort to promote the release of her album, there are events set up in Okinawa, Tokyo, Fukuoka as well as other cities.
The Shade Album Reggae Release Concerts features three main acts who are Female. The concept of Females headlining a Reggae Show is dynamic, different, appealing, and very exciting. Over the years, men have dominated the Stage in the Reggae Industry. So Reggae fans are eager to see if this new and exciting Artist will spark a change in Reggae Music, as far as Reggae Event Promoter are concerned. Challenging then to give more opportunities to female Reggae artist, allowing them to be just as competitive in the industry

Shade’s music style have been said to be a new collage of the strength Marcia Griffiths, the grace and flair of Grace Jones; who she has an uncanny resemblance to, coupled with the determination and legs of Tina Turner. Her music is internally appealing; in the range of Reggae artists Shabba, Maxi Priest, and Shaggy. The uniqueness of shade’s voice and style is hard to miss and will ultimately set her apart from other female artist in the industry.
There is something different about her, something quite attractive. She has a lot of charisma, and is very talented; she is not only a Model/ Singer but she also produces music as well and owns a Production and Marketing Company in the USA.

“My love for music has leaded me to hearts and minds of the Japanese people”.