Mohammad Bahareth grew up in Saudi Arabia and was not encouraged to read English novels. Having been inspired by the works of Sherlock Holmes, Bahareth has put cultural unrest aside and brought the character back to life. 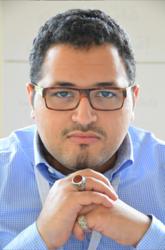 Dyslexia impacts everything I do – I am so proud to have accomplished the completion of a novel. Coupled with the anti-English upbringing I experienced from my cultural system, this is quite a feat and I am very proud of what I have achieved.

Having struggled with both physical and cultural limitations, Mohammad Bahareth has defied the odds – and now brings Sherlock Holmes back to life with his new book.

Growing up in Jeddah, Mohammad was held back by the effects of Dyslexia, as well as a cultural and social system which didn’t approve of reading Western literature or divulging in foreign creativity.

As Mohammad explains, he shunned the norm and took matters into his own hands:
“My wonderful Father always encouraged me to read and from the age of six I couldn’t put English books down. The first book I ever read by myself was 'The Red Headed League,' a Sherlock Holmes novel. I have now decided that it is time to give something back,” says Mohammad.

Giving back he is, by bringing Holmes back to life in a new novel – "Sherlock Holmes in 2012: Timeless Duel."

The intricate and exciting plot sees a bored and curious Holmes travel to 2012 in a self-built time machine. Of course, as with any worth novel – nothing is going to plan. Holmes finds a world of modern-day terrorism and political claustrophobia.

Fans of Sherlock Holmes will have to buy the book to find out what happens. However, as Mohammad attests, it’s a modern day thrill journey, involving a timeless, classic character that gets married at last with an Epic,With old Enemies and New Enemies.

“Sherlock Holmes has always been popular, and this book is proof that he would certainly find the present day very interesting. Readers can expect the finesse and style of Holmes’s traditional character, wrapped up with 2012 culture, customs and technology,” adds Mohammad.

While for many, writing a book would be nothing more than an investment in time – for Mohammad it was a difficult journey:
“I don’t write as easily as most. Dyslexia impacts everything I do, every day – and I am so proud to have accomplished the completion of a novel. Coupled with the anti-English upbringing I experienced from my cultural system, this is quite a feat and I am very proud of what I have achieved,” he concludes.

About Mohammad Bahareth
Mohammad Bahareth grew up in Jeddah, Saudi Arabia. Life for Mohammad wasn’t simple – stricken with Dyslexia and living as a child in a country that disapproved of Western culture, he defied the rules and learned to read English literature. Wanting to give something back to the passion that fueled his creativity, Mohammad has now written his own Sherlock Holmes novel.