The time that Arthur Conan Doyle spent in Devon was critical. It was only when he wrote 'The Hound of The Baskervilles' did Sherlock Holmes become a worldwide phenomenon. It was here, on the moors that Conan Doyle got the inspiration for what was to become the most famous, and most important, crime fiction mystery of all time. 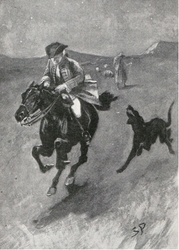 The Hound of The Baskervilles - Strand Magazine

The definitive tour guide for anyone looking to retrace the steps, physically or virtually, of Arthur Conan Doyle during his time in Devon and see the places that inspired the Sherlock Holmes stories.

In November 1887, Beeton's Christmas Annual published a story entitled A Study in Scarlet that was written by a twenty-eight year old Southsea-based physician called Arthur Conan Doyle. It was the first of sixty stories that he wrote over forty years that each feature the now iconic literary detective, Mr Sherlock Holmes. This character has since appeared in around two-hundred and thirty films making him probably the most filmed fictional character of all time.

The long-lasting appeal of Sherlock Holmes is due first and foremost to the story writing skills of Arthur Conan Doyle. However, there is little doubt that had it not been for three residents of Devon, the history of crime fiction might have been very different indeed. Firstly, George Turnavine Budd engineered the circumstances that prompted Conan Doyle to relocate to Southsea and spend more time at his writing-desk. Secondly, George Newnes delivered the Sherlock Holmes tales to a broad readership via the pages of the British and American editions of The Strand Magazine. Thirdly, Bertram Fletcher Robinson was pivotal to the inception of The Hound of the Baskervilles, which first appeared some eight years after Conan Doyle had 'slain' Holmes 'for good and all' in only his twenty-sixth adventure.

In fact, Arthur Conan Doyle wrote in a British edition of The Hound -

"MY DEAR ROBINSON, It was to your account of a West-Country legend that this tale owes its inception. For this and for your help in the details all thanks. Yours most truly,
A. CONAN DOYLE, HINDHEAD, HASLEMERE."

"If George Newnes had not founded the immensely popular Strand Magazine at the time that Conan Doyle wrote his first two Sherlock Holmes short stories and then commissioned many more after their success then perhaps the Holmes adventures would have taken a lot longer to reach such a wide readership, if at all.

This book contains a wealth of information - hard facts and interesting trivia - and displays considerable research and talent upon the part of the authors to present it so as to appeal to people across a broad spectrum. Anybody with the slightest interest in the history of Devon, the writings of Arthur Conan Doyle, the Sherlock Holmes phenomenon or the early days of popular publishing in Victorian and Edwardian times (the 'New Journalism') will find this book a highly interesting read and an indispensable reference. The expansive and comprehensive touring notes will take you to many interesting points and having this book in the car or backpack as you explore Devon will be like having the three authors along with you as knowledgeable tour guides."

Arthur Conan Doyle, Sherlock Holmes and Devon: A Complete Tour Guide and Companion is released on 15th June 2010 and will be a fun read for both the traditional Sherlock Holmes enthusiast and the new breed fuelled by the recent Guy Richie reincarnation in the Hollywood movie Sherlock Holmes starring Jude Law and Robert Downey Junior. Guy Ritchie's Sherlock Holmes has won many awards already including the best action film at the 2010 National Movie Awards , a Golden Globe, IFTA and Empire awards. Through the book fans can see the original places that inspired in particular the ground breaking 'The Hound Of The Baskervilles'.

Paul R. Spiring is a Chartered Biologist and Physicist. He is currently seconded by the British Government to work as the Head of Biology at the European School of Karlsruhe in Germany. Paul is also the joint author of On the Trail of Arthur Conan Doyle and Bertram Fletcher Robinson and has compiled a further four related books. He also maintains a tribute website that commemorates the memory of Bertram Fletcher Robinson BFR Onilne and is a member of the Devonshire Association and a number of Holmesian groups.

Sadru Bhanji is Vice-Chairman of the Devon and Exeter Institution and also Treasurer of the Exeter Branch of the Devonshire Association and past Treasurer of the Devon History Society. He is the author of Barbary Pirates Off the Devon Coast and Postcards from Topsham. Sadru has produced over thirty papers on Devon's local history for various journals including The Lancet, Transactions of the Devonshire Association, The Devon Historian and Devon and Cornwall Notes and Queries. He lives at Topsham near Exeter and is a retired Consultant Psychiatrist and University Lecturer.

About MX Publishing
MX Publishing is the UK's leading Victorian Literature and Sherlock Holmes Publisher based in London. With a dozen new Holmes related titles in the last twelve months MX have several international bestsellers within the genre including the acclaimed Close To Holmes guide to London through the eyes of Sherlock Holmes. Review copies available through the publisher.