Amid historical grain stock shortages, soaring fuel prices and ongoing climate concerns, the nationÂ?s heartland looks to a different source of energy: Ag residues and renewable crops that have no food value. 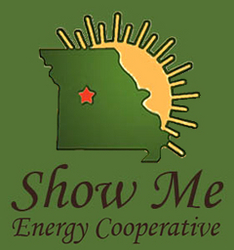 SMEC biomass pellets are made from non-grain bearing crops of cellulose such as Switchgrass, cornstalks, cereal straws, fescue straw and other Ag residues or energy crops that have no food value.

Steve Flick, Chairman of the Board, states, "This is our first pilot project of utilizing biomass pellets in Missouri for coal firing. On behalf of our Farmer Members and its Board Of Directors, we are proud to be a part of this historical event. We look forward to working with the State of Missouri regulatory groups, Aquila and Kansas City Power & Light to provide economic opportunity to local farmers while reducing our dependence on fossil fuels."

SMECÂs goal is to produce thousands of tons of renewable energy pellets to displace non-renewable fuel. If adopted on a global scale, this has the potential to displace millions of tons of greenhouse gases, which are responsible for today's climate change crisis. While others are relying on food crops to create energy, SMEC is demonstrating a sustainable, environmentally friendly way that doesn't threaten the food supply or skew the market.

About Show Me Energy Cooperative:

Show Me Energy Cooperative has as its guiding vision a commitment to establish an innovative, profitable, leading model for production of biomass based fuels which may be replicated across the country by small producer owned cooperatives that will provide a positive economic impact on the regions where they are located. It is a non-profit, producer owned, cooperative founded to support the development of renewable biomass energy sources in West Central Missouri.

For nearly a century, Aquila or its predecessor companies have been providing safe, reliable electricity and natural gas service. Currently the company serves nearly 900,000 natural gas or electric customers in Colorado, Iowa, Kansas, Missouri and Nebraska. The company is currently in the process of selling its properties in Colorado, Iowa, Kansas and Nebraska to the BlackHills Corp., and its Missouri assets to Great Plains Energy. If approved by the Missouri Public Service Commission, these transactions are expected to close later this summer.

Headquartered in Kansas City, Mo., KCP&L (http://www.kcpl.com) is a leading regulated provider of electricity in the Midwest. KCP&L is a wholly owned subsidiary of Great Plains Energy Incorporated (NYSE: GXP).

Steve Flick, Chairman Of The Board