Proceeds from the sale of “Be On Our Way” on the Apple iTunes Store Benefit Brad Pitt’s Make it Right Foundation. 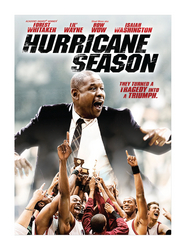 Blend of soul music and socially conscious rap pays homage to the survivors of Hurricane Katrina.

As part of the ongoing efforts of multi-platinum composer/producer Frank Fitzpatrick and his NGO EarthTones (“Healing the World Through Music”), a new campaign is underway for victims of Hurricane Katrina. Fitzpatrick brought together a group of like-minded artists (including Grammy Award winner Van Hunt, New Orleans’ born rapper Supervision, Buku Wise and singers from the original Hidden Faces) to help him create “Be On Our Way”, the featured song from Forest Whitaker’s new film, “Hurricane Season”.

”Hurricane Season” is based on the true and inspiring story of Al Collins (Whitaker), a high school coach, who pulls together an unlikely group of high school basketball players - many left homeless and disenfranchised by the devastation of Hurricane Katrina. Against all odds, the young men learn the true meaning of survival and team spirit that carries them on to win the Louisiana State Championship. “Hurricane Season”, stars Forest Whitaker, Isaiah Washington, Courtney B. Vance, and rappers Bow Wow and Lil’ Wayne.

When Fitzpatrick learned director Tim Story (Barbershop, Fantastic Four), and the Weinstein Company were making the film, he felt inspired to create both the song and an opportunity that could help people of the Lower Ninth Ward, who are still trying to rebuild their lives in the aftermath of one of the worse disasters in American history. After recording the song, Fitzpatrick joined forces with the Apple iTunes Store to promote and release the single, and reached out to Brad Pitt’s Make It Right Foundation, to be the recipient of the proceeds.

"Be On Our Way" pays homage to the survivors of Hurricane Katrina and the spirit of New Orleans in a stylized "Curtis Mayfield meets Tupac-like" blend of soul music and socially conscious rap. “Be On Our Way” is also an expression that means to pick up the pieces and carry on, even in the face of challenge or hardship. Fitzpatrick's hope is that the song, the film and the campaign can help the affected families do just that.

"Be On Our Way" (Van Hunt, featuring Supervision, Buku Wise and singers from the original Hidden Faces) will be released by Hip Hop Connect exclusively through the Apple iTunes Store on December 8, 2009, the same day that the movie, “Hurricane Season” directed by Tim Story and starring Forest Whitaker, will come out on DVD. Earthtones is donating 100% of the net proceeds from the sale of "Be On Our Way" to Make It Right.

About EarthTones:
EarthTones is a California 501c3 non-profit arts organization committed to raising social consciousness and connecting people across the globe through the power of music and media. It uses revenues generated from corporate sponsors, sales and donations to develop multimedia projects with a positive intention to bring about social change. The organization is founded by multi-platinum producer/composer/filmmaker Frank Fitzpatrick.