First Time for American Wine in 110 Years of Awards 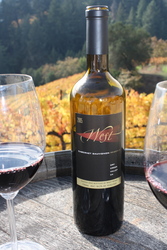 2005 West Cabernet Sauvignon Reserve from Sonoma County is the first American wine to be served at the Nobel Prize Banquet.

We are extremely proud that our West Cabernet Sauvignon was served at the Nobel Banquet.

The 2005 West Cabernet Sauvignon Reserve from the Dry Creek Valley region of Sonoma County is presently being served with the entrée at the Nobel Banquet for the Nobel Prize laureates, the Swedish royal family, and 1,300 guests. The festivities are being held at the Blue Hall of the City Hall of Stockholm. This is the first time in Nobel Prize history, going back to 1901, that an American wine was selected for the dinner. A special panel of wine experts blind tasted wines from around the world for the honor of being part of this prestigious ceremony. To view the 2010 awards banquet dinner menu, please visit http://www.nobelprize.org/nobel_prizes/award_ceremonies/banquet/menus

West Wines is owned and operated by Katarina Bonde and her husband, Bengt Akerlind. They both were born in Sweden and moved to Seattle in 1992 to work in the IT-industry. In 1998 they bought a 60-acre vineyard in the Dry Creek Valley region of Sonoma County as a getaway to relax and enjoy “wine country living” in northern California. Initially, they spent occasional weekends at their vineyard, located near the town of Healdsburg. Eventually they became more and more involved in farming the vineyard and spent more time there.

Since they both love wine, in 2002 they decided to create their own brand, West, with the assistance of consulting winemaker Julia Iantosca. The name came from the fact that their vineyard is located on the western slope of Dry Creek Valley, in the western part of Sonoma County, which is one of the westernmost wine producing areas in California, on the American west coast, in the western hemisphere of the world.

Bonde and Akerlind have now moved to Sonoma County and live surrounded by their vineyard. They continue to work part-time in the IT sector.

“We are extremely proud that our West Cabernet Sauvignon was served at the Nobel Banquet,” says Bonde. “This is a huge honor for us and being from Sweden we know how this event captures worldwide attention ”

West wines are sold in Sweden at top rated restaurants and directly to consumers in America. The winery now produces 1,000 cases a year. For further information about the winery, visit http://www.westwines.com.

For further information on the 2010 Nobel Banquet, visit http://www.nobelprize.org.

The Sonoma County Winegrape Commission was established in 2006 as a non-profit marketing and educational organization dedicated to the promotion of Sonoma County as one of the world’s premier grape growing regions. SCWC’s goal is to increase awareness and recognition of the quality and diversity of Sonoma County’s grapes and wines through dynamic marketing and educational programs targeted to wine consumers around the world. For more information about SCWC and its programs, visit http://www.sonomawinegrape.org

Bengt Akerlind and Katarina Bonde toast their 2005 West Cabernet Sauvignon Reserve from Sonoma County -- the first American wine to be served at the Nobel Prize Banquet in Stockholm by Larry Levine.