Higher demand from corporations and individuals for professional coaching programs is putting upward pressure on income potential for coaches, according to Barbara Fagan, Source Point Training co-founder and master coach. Increased demand for coaches is also putting additional pressure on the current inventory of well-trained and certified coaches. 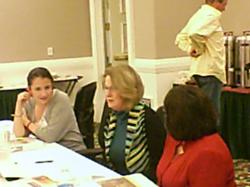 The word is spreading to look for coaches who have undergone certification approved by organizations like the International Coach Federation. When you go through our program, you're getting the best training that's available, anywhere.

According to the 2012 ICF Global Coaching Study, revenues from professional coaching has nearly doubled over the past few years: globally to $1.9 billion, $707 million in North America alone. The same report shows that in North America the average annual income has risen to about $50,000 with median annual incomes at about $30,000. Industry trends also show that top-earners are now earning in excess of $65,000 a year.

"Rising demand is not only coming from corporations, but from individuals who want more productivity at the workplace and greater satisfaction from their work," says Fagan. "And the rise in demand is fueled by report after report that shows how effective professional executive coaching really is."

Research conducted by the Chartered Institute of Personnel and Development (CIPD) in London, UK, shows that businesses can use coaching to maximize the value of their employees. Another report from the Aberdeen Group, based in Boston, MA, reports that businesses that invest in employee training tend to reap the benefits in terms of improved engagement and retention levels.

Another study conducted in 2008 by PricewaterhouseCoopers and Association Resource Centre, Inc., shows that companies that use professional coaching reported a median return on investment of seven times their initial investment.

“I've been involved in coaching for 25 years, so I'm not surprised that more and more people have ‘discovered’ the value of professional coaching,” she says. “Muhammad Ali had Angelo Dundee. UCLA Bruins had John Wooden. The Green Bay Packers had Vince Lombardi. They all had coaches who brought out their best and Business is now looking for a way to emulate that model of success.”

Source Point Training co-founders Fagan and Lou Dozier created their well-known “Coaching Fundamentals & Mastery Certification” programs several years ago to train people who were in mid life transition and wanted to developed the coaching core competencies to support people in achieving the results they want in life.

"We approach coaching from an ontological perspective, recognizing that all aspects of a person’s life are inter-related so that creating change in one area of life will impact the whole “ says Fagan. “When you become a Certified Professional Performance Coach (CPPC), you leave with skills to be an effective coach; to hear and observe what your clients are saying and not saying; to be able to open a new level of self-awareness in your clients; and to build greater personal accountability and ownership for the results that your clients want.”

Source Point’s faculty works with each student coach in a very high touch and personal way to develop their unique coaching style. Because it is so comprehensive - requiring 9 months and 150 hours of classroom training plus virtual and one-on-one mentoring - the program is offered only once a year. This year, Coaching Fundamentals is scheduled to begin September 14, and will take place in Phoenix, AZ. Coaches are certified in June having attended five, 3-day sessions over the 9 months. Business planning and marketing experts are provided so each graduating coach leave with a solid business platform to launch their business. “Most coach training does not provide this level of detail, which is why we believe our program sets our graduating coaches up to be successful and impact lives so positively,” says Fagan.

The ICF approves programs offered by Source Point Training for 141 Continuing Coach Education (CCE) units. "Source Point Training is honored to carry more CCE units, than any other coach training organization " Fagan states. "The word is spreading to look for coaches who have undergone certification approved by organizations like the International Coach Federation. What this says is that when you go through our program, you're getting the best training that's available, anywhere."

“Professional executive coaching is not a fad,” Fagan says. “It is based on a strong trend that has been building for more than 20 years. The fact is, about half of companies in the U.S. currently implement coaching programs for their employees and staff.” The American Management Association recently reported that 37% of U.S. businesses say that they are planning to start in the near future.

People who find themselves in a career transition and who have extensive life experiences in different fields see being a professional coach as a means to generate income and contribute to others. Medical and therapeutic practitioners, fitness trainers and physical therapists are taking up coaching to increase client progress. “This is a great time to become a professional coach,” Fagan explains.