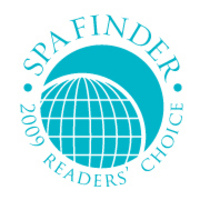 With 15,000 hotel, resort, and destination spas worldwide, the industry has never been more vast, diverse, or truly global, and our awards uniquely capture these realities

SpaFinder, Inc., the global spa and wellness resource, today revealed the winners of its prestigious 2009 Readers' Choice Awards, honoring spa-goers' favorite spas across the world--by continent and country/region--as well as their top picks in 27 diverse categories.

The 2009 SpaFinder awards attracted an unprecedented level of consumer participation, while also providing the most comprehensive assessment of the global spa market to date: More votes were cast (360,000)--across more countries, regions, and categories--than in the program's seven-year history.

In addition to regions/categories traditionally recognized by the awards, new destinations were added in '09, including Argentina, Mainland China, Scandinavia, Spain, and South Africa, along with timely new categories like 'Best for Environmental Practices.'

Several macro trends emerge: an exceptional showing for spas with an explicit wellness/health/fitness focus, a striking performance by globally branded spas (such as ESPA, Fairmont Willow Stream, Four Seasons, Mandarin Oriental and Spa Chakra), along with an uptick in honors for spas with a water/hydrothermal focus, perhaps reflecting a renewed consumer enthusiasm for spa's ancient roots.

"With 15,000 hotel, resort, and destination spas worldwide, the industry has never been more vast, diverse, or truly global, and our awards uniquely capture these realities," noted SpaFinder's president, Susie Ellis. "Readers' Choice has become the industry's premier awards program for reflecting the real, unvarnished opinions of global spa-goers. And for every spa singled out, it represents a tremendous honor."

The 2009 awards are based on votes submitted worldwide at SpaFinder's global consumer websites (including SpaFinder.com) and by readers of SpaFinder publications. Voters were asked to cast ballots only for stay spas they've personally visited within the past three years.

The Crystal Award, the most coveted Readers' Choice honor, recognizes the most extraordinary spa on each (habitable) continent. This year's standard-bearers are:

Awards were given for the top spa in each of 33 countries and regions, from traditional destinations like Thailand or the Caribbean to emerging markets in Asia or South America. In addition to the Crystal Award continent winners named above (who also took top honors in their country/region), here's the list of global favorites:

To help consumers identify the best spas for their specific goals, SpaFinder readers also named their picks for the best spas across 27 categories: from 'Best for Affordability' to 'Best for Men' to 'Best Medical Program.'

A complete list of Readers' Choice Award winners will be featured in SpaFinder's 2010 Global Spa and Wellness Directory and can also be accessed at:

In conjunction with its Readers' Choice Awards, SpaFinder this week also named Dr. Andrew Weil the recipient of its seventh annual Visionary Award, presented to an outstanding contributor to the spa and wellness industries. Dr. Weil was honored as a trailblazer in integrative health and healing, and for his work bridging the worlds of medicine, complementary medicine, and spa.

LEARN MORE: To learn more about the awards, or to speak to SpaFinder president Susie Ellis for trends/analysis, contact: Betsy Isroelit @ RBI, (213) 300-0108 or betsy (at) rbicom (dot) com.

About SpaFinder, Inc.: The world's largest spa media, marketing, and gifting company, SpaFinder, Inc., connects millions of wellness-focused consumers with thousands of spas worldwide. SpaFinder's media properties include the award-winning Spafinder.com, the Spa Enthusiast newsletter, and the annual Global Spa and Wellness Directory. SpaFinder and its new gift division, Salon Wish, offer spa gift certificates and cards that are redeemable at a combined network of over 9,000 spas and salons worldwide and are available at thousands of retail outlets. The company's technology division innovates new solutions that help spas build and streamline their businesses, including the popular SpaBooker online booking system. SpaFinder Europe and SpaFinder Japan offer regional spa marketing and gifting programs, including localized, native-language websites. Founded in 1986, the privately held company is headquartered in Manhattan.