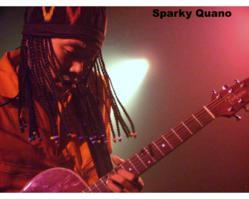 The musicianship heard from Sparky Quano isn’t something that is found every day. It’s akin to some of the most well-known guitarists from Jeff Beck to Michael Hedges to Kaki King.

“To see him perform live is an awe-inspiring event.” - Unsigned Magazine

Sparky Quano is far more than a Japanese guitarist - he is a one-man orchestra that layers sound upon sound using only his guitars. While he is prominently known for his electric guitar playing, JENGA (his latest release) is centered mainly around Sparky Quano’s prowess on the acoustic guitar. The musicianship heard from Sparky Quano isn’t something that is found every day. It’s akin to some of the most well-known guitarists from Jeff Beck to Michael Hedges to Kaki King.

On JENGA, Sparky Quano quickly enraptures the listener with his carefully crafted guitar playing that ranges from music that could be used for a lullaby to music that sounds like it’s from another galaxy. “I wanted this music to create a powerful feeling within the listener,” Sparky said. “I wanted it to be as if the listener was hearing the sound of life.” The power is certainly heard on “Mind,” which has a steady hypnotic bass line with other layered acoustic guitar parts to round it out, followed by an electric guitar riff that would make Thurston Moore of Sonic Youth jealous. Quano treats his guitar as a drum on several songs, giving the music a steady back-beat that acts as an anchor for the listener.

When it comes to his music, Sparky Quano truly is a one-man orchestra. Quano wrote, recorded, produced, and mixed JENGA entirely on his own. He simply wants people to “feel free and enjoy” his extraordinary guitar playing.

You can learn more about Sparky and see his latest show dates on his website at sonicbids.com/sparkyquano.