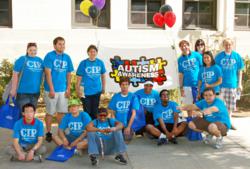 CIP students from across the country volunteered during Autism Awareness Month

This event shows how we can actively contribute to the community by advocating for individuals with disabilities.

Vasha Specian was first in line at the volunteer booth on Kite Day for Autism in Framingham, Massachusetts on April 28. “They really needed someone to wear the Cookie Monster costume, so I agreed to do it right on the spot,” Vasha commented. “As soon as I put the costume on, little kids with autism and other learning disabilities started hugging me and wanted their picture taken with me. It was very cool interacting with everyone.”

Vasha is a determined young man who has overcome many obstacles during his 22 years. He has been diagnosed with High Functioning Autism, ADHD, and Dyslexia. Despite his learning differences, Vasha was eager to help others on Kite Day, an annual event held during Autism Awareness Month in April.

Vasha is a student at The College Internship Program (CIP) in Lee, Massachusetts. CIP is a national post-secondary program that supports young adults age 18-26 with autism and other learning differences as they transition to college, independence and the workplace. “People told me I would never graduate from high school, get a job or drive a car,” Vasha commented. “I have worked hard and am happy to say I have accomplished all of these goals, despite what people told me.” Vasha attributes a great deal of his success to his experience at CIP.

CIP operates programs in six locations across the US. This year, students chose autism-related charities to support during Autism Awareness Month and spent hundreds of hours volunteering in their respective communities. In Florida, CIP students staffed a booth at the All Kids Can Family Festival in Melbourne, while students in Indiana participated in the Celebrating Abilities Resource Fair, a non profit where CIP students Adria Nassim and Bess Molenda serve as interns. “This event shows how we can actively contribute to the community by advocating for individuals with disabilities and promote a can do attitude,” commented Adria. In New York, Amherst students helped raise money for autism research and participated as a team at a Walk For Autism event that drew over 4,500 people.

CIP student Stefan Solvason was also positive about his volunteer experience. ”It was really nice to help out at an event that advocates for people with special needs,” he stated. Stephan has also also been diagnosed with autism. He participated in Stepping Stone Growth Center’s Every Step Counts Walk/ Run event in Berkeley, California. In Southern California, Long Beach students participated in an Autism Awareness Walk and Resource Fair at the Rose Bowl in Pasadena. “It was an awesome event,” stated Tess Granberg. “I have always wanted to do an autism walk.”

CIP was founded in 1984 and is known for providing in-depth services that help prepare young adults with autism and other learning differences for the workforce and independence. “We are fortunate to have such a great group of students at our Centers across the country,” commented Heather Greene, CIP’s Executive Director. “Each student has their own unique set of challenges, yet they were eager to volunteer and help others on the autism spectrum,” she continued. “With the CDC reporting that incidence of autism now affects one in 50 young people, we recognize how much support this population needs as they grow into adulthood. We are here to help our students build productive lives and we are proud of each and every one of them.”