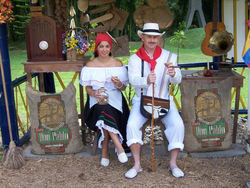 I started bringing back Colombian brands; 100% Arabica coffee that was roasted right by true craftsmen. It was a little darker, much richer, and a lot smoother than the coffees that were available in the U.S. Friends and family went crazy over it.

CNN recently aired a report on Burke Brands LLC in its Small Business Success series, noting the company's innovative business model and remarkable growth. The segment which aired on July 15th covered all facets of the company's specialty coffee roasting business including its organic conception and development, rapid growth, its unique business model, and its future plans.

The CNN interview touched on Burke Brands unique business model of making small batch "artisan" roasted coffee available to a mass market at half the price of traditional artisan roasted coffee. Because Burke Brands grows their own coffee and has solid relationships with green coffee producers worldwide, and then roasts to order across the country in several small batch regional roasting facilities, the company is able to offer the freshest, highest quality coffee possible. And because the company sells only to large retailers and distributors that have lower mark ups, the price of their product represents a considerable value to the consumer.

According to the CNN report, Burke Brands Coffee Roasters, which was incorporated by Darron and Eliana Burke in 2004, was conceived of back in 1989 when the couple first traveled to Colombia, South America together. Mr. Burke, who is from New England, relocated to Miami in the Summer of 1989 in search of adventure, and there he met Eliana who was born and raised in Colombia. The couple quickly fell in love and traveled to the country's coffee growing region to meet Eliana's family.

"Arriving in Colombia, I was immediately struck by how beautiful the country was; it's lush green mountainous terrain, its vibrant cities, and its warm and welcoming people," Burke remarks. "I had no real idea of where coffee came from back then, and I was instantly intrigued by the whole process - growing, picking, processing, and roasting. I wanted to learn everything I could about it and share my experiences with people back home."

Burke discovered that there was a market for a higher quality coffee than the national brands that had dominated the supermarket shelves at the time. "No one had heard of Starbucks back then, at least not on the East coast," Burke says. "I started bringing back Colombian brands; 100% Arabica coffee that was roasted right by true craftsmen. It was a little darker, much richer, and a lot smoother than the coffees that were available in the U.S. Friends and family went crazy over it." The Burke's created the Cafe Don Pablo, and Pablo's pride brands - http://www.cafedonpablo.com/ - to address the increasing demand for specialty coffee.

The Burke's incorporated their business only four years ago, after a decade and a half of travel to Latin America's coffee growing countries, forging relationships with growers, roasters and others in the supply chain, and researching the industry. Darron Burke earned an MBA and Masters of International Business in that time, and became fluent in Spanish. "It was very organic," Burke recounts. "Coffee became our passion, a sort of casual obsession you could say. All of our travel revolved around coffee, all of my research was related to coffee, and all of our friends seemed to be connected to coffee in some way."

The Burkes started growing their own coffee in 2004 with the help of Gustavo Rincon, a friend and fourth generation coffee farmer from Pereira, Colombia. Gustavo is now Burke Brands' Chief Agriculturist, and Sharing Certified Administrator for Colombia. "Gustavo has been studying agriculture and growing coffee his entire life. He is an incredible wealth of information." Burke says. "He's also extremely energetic and has a good soul. We've put him in charge of our CSR program in Colombia - http://www.sharingcertified.com/ - he was the perfect fit for the job."

In addition to CNN, the Burkes have been featured on the Spanish broadcasting network Telemundo, and they've recently been interviewed by the Executive Editor of a Time-Warner publication for an article that will go to print sometime in '09.