Kids participating in sports at one of the many indoor athletic arenas nationwide can be exposed to potentially life threatening bacteria lurking in the synthetic turf. Sports Turf Northwest this week introduces the miniZapr™ for bacteria- and virus-fighting technology to combat MRSA, Staph, Influenza (H1N1) and other harmful toxins. 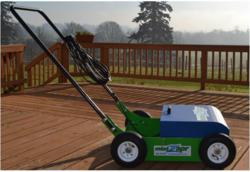 The risk of children and adult athletes contracting Staph, MRSA, and other infections from indoor sports turf is a growing cause for concern among parents and medical professionals.

Former NBA star Brian Grant joins Sports Turf Northwest partners Craig Prunty and Mike Woelfel to promote the miniZapr’s sterilization properties to the indoor sports arena industry – no easy task, since many indoor sports arenas are not interested in focusing attention on the potential problems caused by bodily fluid contaminants that accumulate in indoor turf. The risk of children and adult athletes contracting Staph, MRSA, and other infections is a growing cause for concern among parents and medical professionals, and sanitizing these surfaces without caustic chemicals had been a serious challenge for indoor sports operators before the miniZapr was developed.

The problem of child safety arose when Prunty’s son contracted a staph infection while playing sports. Shaken by the ordeal, Prunty wondered how many other young athletes had contracted infections, and how many more are at risk. After speaking with other parents who shared similar experiences, the search for a solution began. Harmful microorganisms from bodily fluids (urine, stool, sweat and blood) have long been a health concern at indoor athletic facility surfaces including showers, floors, walls and sinks. The Centers for Disease Control (CDC) has published findings that state contact sports have a higher rate of Staph and MRSA infection transmission than non-contact sports, and indoor sports facility surfaces serve as petri dishes for infectious microbes.

According to the CDC, the transmission of MRSA and Staph is more prevalent in sports that involve any one of five elements (the five C’s:) crowding, contact, compromised skin, contamination, and cleanliness. The CDC also makes clear the fact that only one of the five C’s is needed to cause a player to be infected with Staph or MRSA.

For children and adult athletes who play on synthetic turf, which is becoming the norm in indoor sports facilities that provide year-round athletic playing fields, several or all five C’s are often present which dramatically increases the odds of infection. Falls on artificial turf can lead to turf burn or minor cuts and scrapes, which makes the athlete more susceptible to infection. Compounding the risk are injuries that many people may forget about; for instance, a girl who shaves her legs in the morning may nick herself. When she arrives at the indoor field for a soccer match that afternoon, the nick on her leg increases her vulnerability to infection.

“We have spoken to plenty indoor athletic facility operators and they are very aware of the issue,” says Woelfel. “But until someone files a legal action against a facility, nobody is going to do anything about implementing sanitizing standards, and kids and adults alike continue to be placed at risk needlessly.”

A major national association for indoor sports facilities has acknowledged to Woelfel that the industry is aware of the potential for harm that unsanitized surfaces present, and they tell him they have looked for solutions to making these surfaces safer for athletes and kids, but they’re not willing to address the subject in a public forum.

“We want to be the bucket of water in the face and let these facilities know they can take a proactive approach to reducing or eliminating the risks to the athletes who use their facilities, and they can do it efficiently and inexpensively with the miniZapr.”

Based on a design utilizing the same technology as the outdoor field GreenZapr, the miniZapr sterilizes surfaces safely and quickly using germicidal ultraviolet (UVC) lights and no chemicals. Harmful microorganisms including MRSA and Staph are destroyed instantly when exposed to the miniZapr’s UVC lights. About the size of a lawnmower, the miniZapr can be plugged into an ordinary wall outlet or can be run using an on board generator. Its eight proprietary, shatter- proof UVC bulbs are designed to provide the energy dosage required to destroy harmful bacterial and viral DNA.

Utilizing the included hand-held wand, the mobile miniZapr can also be used to destroy the most dangerous bacteria and viruses in locker rooms, equipment rooms, weight rooms, shower areas, floors, walls and any area that harbors harmful microorganisms to prove the most efficient, cost-effective indoor sports surface sanitizing method available in the industry. The hand-held want has two powerful UVC bulbs, a 25-foot cord and shares the same control module as the main unit, all stored under the mini-zapper’s blue shield,

An authorized dealer for the Greensgroomer Worldwide line of natural and synthetic turf maintenance equipment,Sports Turf Northwest and its sister company UVC Health Equipment provide equipment and expertise to help all industries utilize UVC technology to eradicate harmful bacteria and viruses from surfaces.

Sport Turf Northwest donates a percentage of every sale to the Brian Grant Foundation, established in 2010 to support efforts to build awareness, increase early diagnosis, and educate patients and their families on Parkinson’s Disease. The Foundation also provides a viable forum for people affected by Parkinson’s.

Germicidal UVC lights provide proven bacteria and virus fighting power to destroy harmful viruses including MRSA, Staph, C. diff, HIV, Influenza (H1N1) and many others that can be harmful to humans.