The new expanded edition of the top selling card game Spot it! offers more ways to play, new symbols, big twists, and exciting game accessories. Spot it! Party is expected to be a hot gift item this Holiday Season. 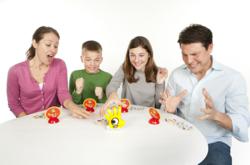 Spot the match, snatch the hand, catch the fever!

Spot it! Party is designed to excite devoted fans and hook new players... We expect it to be a big draw this holiday season.

Blue Orange Games, leading producer of tabletop and board games for families, is launching an expanded party edition of their best selling game, Spot it! at the American Specialty Toy Retailing Association (ASTRA) 2013 Marketplace & Academy on June 16th through 19th in Nashville, Tennessee.

The fast-paced card game, Spot it! debuted in 2010 and exploded in popularity, spurring the release of multiple editions and licenses. Both Spot it! and its Junior edition, Spot it! Jr. Animals have been nominated by the Toy Industry Association for Toy of the Year awards. Although the original games are well known for their travel-sized tin canisters, the company felt it was also important to offer a traditional "big box" game with more content for larger gatherings and special occasions. Blue Orange Games hopes to capture a new audience with the Party edition and increase the game's challenge level.

“Spot it! Party is designed to excite devoted fans and hook new players. We are pleased to release the game before fourth quarter planning starts. We expect it to be a big draw this holiday season. We can’t wait to hear what our retailers have to say about it at ASTRA,” said Martin Marechal, Director of Sales and Marketing at Blue Orange Games.

Along with the playing cards, the game box contains eight card holders and a Hand Mascot, a totem of the character taken from the game's logo. The cards have a brand new set of fun and quirky symbols, such as a gnome, a plunger, and headphones. If seasoned players are too quick to spot the symbols in the original Spot it!, the Party edition will level the playing field.

All Spot it! games are centered on a mind boggling concept: between any two cards in the deck, there is always going to be one (and only one!) matching symbol. Players aim to be the quickest to spot the match. It sounds simple, but with different sizes and orientations, a match is easily hidden in the array. Couple this with the fact that players are racing feverishly against their opponents, and it's the perfect recipe for an adrenaline pumping, uproarious and all around ruckus-raising party game.

Spot it! Party lets players choose from six individual mini-games with separate rules and objectives. Favorites like “The Tower” get a big twist with the introduction of the Hand Mascot. In addition to match making, players have to keep their eyes peeled for their chance to steal or pass the Hand Mascot—it can make or break a win. New mini-games called The Race, Dynamite, and Double Frenzy involve the card holders and take the game to the next level testing players' memory and multi-tasking skills.

Spot it! Party promises the ultimate play session and will hook kids ages 10 to 100 for hours of electrifying fun. The suggested retail price for Spot it! Party is $19.99, and it will be available mid July 2013.

About Blue Orange Games:
Based in San Francisco, Blue Orange Games has been creating timeless games for the whole family since 2000. Their catalog of over 40 award-winning products has earned a reputation for high play value, skill development, and continuous fun. The eco-friendly company focuses on high quality designs using durable materials and plants two trees for each tree used in game construction. For more information, visit http://www.blueorangegames.com.

Spot the match, snatch the hand, catch the fever!

Snatch the Hand to gain the upperhand!