Leandra Ramm Reveals How She Overcame an International Cyber Stalking Experience in an Inspirational Book, “Stalking a Diva," and on TV in "My Life is a Lifetime Movie"

Renowned vocalist and performer, Leandra Ramm, will release her e-book, “Stalking a Diva,” on November 8th, 2012 to shine light on the frightening tale of an international cyber stalking incident, the startling truth behind law enforcement’s inability to protect her, and her eventual victory despite seemingly insurmountable obstacles. 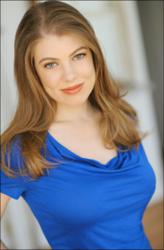 “My goal is to save people from going through this by helping to create [international cyber stalking] laws by bringing awareness to cyber stalking and sharing my experience,” Leandra says.

Renowned singer and performer, Leandra Ramm, is co-authoring a tell-all book with privacy rights lawyer D. Rocca to share a detailed account of the shocking truth behind the terrifying international cyber stalking ordeal that tormented her for more than six years. The frightening story began when a man posing as the director of the Singapore Music Festival contacted Leandra to discuss booking her for a performance. Once he began to reveal his true intentions, Leandra realized that he was a fraud, and he began taunting, threatening, and stalking her as his obsession grew. Through determination and perseverance, she was able to fight back and eventually end all contact with and from the stalker.

Leandra experienced the most tumultuous and difficult time of her life while her cyber stalker, Colin Mak, unleashed every resource he had available to torment her from the other side of the world, although it seemed as if he was outside her doorstep. Leandra contacted the NYPD, the FBI, the U.N., and other government agencies, and none were able to provide protection or to put a stop to the cyber stalking, as there are currently no international treaties in place to prevent cyber stalking. For 6 long years, Leandra fought against the stalker who, from Singapore, did everything within his power to shatter her reputation, diminish her credibility, and ruin her life via the Internet, email, phone, and postal mail.

Through the psychological torment, thousands of death threats, slanderous blogs, and the terrifying obsession, Leandra continued to fight for herself, her family, and her friends. Everything changed when she began working with A.J. Fardella, an expert in cyber crime and digital forensics. One month after retaining Fardella, Leandra saw her 6-year ordeal end with the arrest of her stalker in Singapore. After her hard-won victory, Leandra has become an activist that supports establishing international law enforcement treaties to protect people from going through the same terrifying experience that she endured. By sharing her story, she hopes to bring more attention to the problem of preparing our local, state, and federal law enforcement with tools, training and mutual law enforcement treaties so that these agencies can step in and protect people in a similar situation.

“My goal is to save people from going through this by helping to create [international cyber stalking] laws through bringing awareness to cyber stalking and sharing my experience,” Leandra says.

To be featured on the Lifetime Network's new series “My Life is a Lifetime Movie” on November 28th 2012 at 10pm EST and in her upcoming book, “Stalking a Diva,” released on November 8th, 2012 on Kindle, Nook, and iBooks, Leandra aims to shed light on the chilling reality of cyber-stalking that many people face. By bringing awareness to this subject, she hopes that more people will be spared the anguish of the growing threat of cyber stalking.

As part of the United Solo Theatre Festival, Leandra will be performing a one woman show on November 11th, 2012 at 6pm at Theatre Row-Studio Theatre in New York City where she will perform an autobiographical play with music focusing on her cyber stalking ordeal.

For more information about this story please read about it in The Economist Magazine: http://www.economist.com/node/18584386.

Additionally, please see the attached media package which includes PDF versions of The Economist Magazine article and an article about this case in The Contra Costa Times.

Media Inquiries: Contact Leandra Ramm to learn more about her story or about her upcoming book.