HomeThang.com offers a selection of steam shower stalls that offer all the functionality of a whole-scale custom shower while totally eliminating all the major expenses that typically put such an upgrade out of reach. Also, a tip sheet is introduced, to show the advantages of pre-made steam showers. 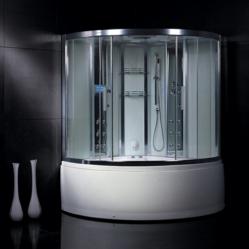 Steam shower stalls offer all the functionality of a whole-scale custom shower while totally eliminating all the major expenses that typically put such an upgrade out of reach.

HomeThangs.com – the Home Improvement Super Store has made their goal to deliver the right product to the consumer, with that in mind, shopping and home design tips, as well as special product selections are being introduced.

A “true” custom shower often has to be built from the ground up, including building a base for the shower, rerouting plumbing through the walls, widening drains, tiling, sealing, and then installing the fixtures. But pre-made steam showers like the ZA219 Steam Shower from Aston for example, work differently. In the same way that a shower floor or shower wall is easier to install than a from-scratch tile job, so too can steam showers more or less just be plunked into place, even though they’re much larger and have much more extensive functionality.

HomeThang.com offers a selection of steam shower stalls that offer all the functionality of a whole-scale custom shower while totally eliminating all the major expenses that typically put such an upgrade out of reach. Also, a tip sheet is introduced, to show the advantages of pre-made steam showers.

1.    All Parts Included
In a custom shower, each and every component has to be purchased and installed separately. While some manufacturers offer whole shower systems, there’s a lot that goes into a complete custom shower set, and often one has to buy all the different shower heads and body sprayers separately. And that doesn’t even include the added expense of procuring and installing a full steam bath system with built in lights and audio, let alone the cost of the shower doors or stone or glass tile. Steam showers like Ariel AmeriSteam ZA219 by Atlas, for example, are complete enclosures from top to bottom, with all of that already built in, often costing less than any of those components individually.

2.    Steam Showers Work with Your Existing Drain
Like a shower floor, shower pan, or shower wall, steam showers install directly into place a few inches above the floor, and are designed to fit standard “shower-sized” spaces so one won’t have to make any structural alterations to install one. They have a flexible hose that connects the bottom of the shower to an existing drain. If the current setup is water tight and reliable, installing a new steam shower is only very slightly more complicated than just setting it into place. There are also ones designed to fit 2 people inside at the same time, like Ariel Platinum DZ962F8 Steam Shower by Atlas for example.

3.    Steam Showers Work with Existing Plumbing
This is one of the most important pros of installing steam showers. Where custom showers require knocking down walls and running plumbing to three sides of the enclosure, steam showers not only connect to the existing drain, but only require the single water input hookup. The main shower head, hand held shower, rainfall shower head, steam generator, and body sprayers all connect to this single feed via flexible hoses. All it takes is just to screw them tight, and the Steam Shower Enclosure gives the same effect as a custom shower without any of the pricy demo or construction.

4.    Not Just Easy – They’re Fast, Too
From front to back, top to bottom, start to finish, steam showers are less expensive than custom showers in just about every way. But that isn’t their only advantage. All that expensive construction that goes into a custom shower also takes time. Especially if ripping out walls and floors, that’s the kind of construction that not only seems to last forever, but is also super invasive and disruptive. Steam showers like Zaa210 Shower by Aston or Ariel Platinum DA333F8 Shower cabin by Atlas, do need to be professionally installed, but largely just as a layer of insurance against leaks or electrical problems. Beyond that, it’s not much more complicated than insert tab A into slot B, and doesn’t take much time to assemble and install.

5.    Reasonable Water Usage (?!)
In a traditional custom shower, many gallons of water per minute are used, requiring a larger water heater and expanded draining capabilities. Steam showers don’t require either, but that’s because they don’t put out quite as much water as a fully custom designed system would. Practically speaking, that means they put out maybe 6-10 gallons per minute as opposed to a custom shower that would do half again as much or even double that amount or more.

6.    Low On Space? No Problem!
Perhaps the most genius application of the steam shower, though, is the steam shower/bath. Like the classic shower/tub combo, this provides the functionality of both a shower and a whirlpool bathtub in the space of one, but with the added bonus of having a fully functional built in shower and steam bath system. So if the dream bathroom aspirations are limited not only by the budget but also by the size of the bathroom, the ZAA208 Shower Tub by Aston, for example, is not only a custom shower, steam bath, and tub… it’s also a jetted whirlpool, all in the footprint of a standard bathtub.

So, many of the most luxurious items can be found at surprisingly reasonable prices – one just has to know how to shop with some savvy.