Stertil-Koni has been awarded US Patent 8,191,865 for its innovative ECOLIFT heavy duty scissor lift. 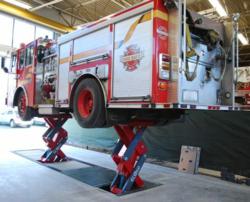 In making today’s announcement, Stertil-Koni noted that the release of the ‘865 patent further solidifies the role of Stertil-Koni as one of the premier suppliers and creative inventors of heavy-duty lifts to the North American market.

Stertil-Koni USA, the leader in heavy duty vehicle lifts, is pleased to confirm the official release and issuance of US Patent 8,191,865 on June 5, 2012. Stertil-Koni has been awarded this patent for its innovative ECOLIFT heavy duty scissor lift. US Patent 8,191,865, which can be found online at http://www.freepatentsonline.com/8191865.pdf, covers the ECOLIFT system, including the combination of the scissor mechanism, carriage, cover, and other parts.

In making today’s announcement, Stertil-Koni noted that the release of the ‘865 patent further solidifies the role of Stertil-Koni as one of the premier suppliers and creative inventors of heavy-duty lifts to the North American market. The issuance is also part of a precedence of innovation in U.S. history.

The patent system was created through the U.S. Constitution for the purpose of promoting the “.... progress of science and the useful arts....” The origin of patent law dates back to 1790 and was one of the first acts of the new Congress. Essentially, a patent is an exclusive right granted by a country to an inventor (or inventors) allowing the inventor to exclude others from making, using or selling his or her invention in that country during the life of the patent.

The importance of the patent system in promoting innovation in engineering was well known to Thomas Jefferson, Benjamin Franklin, Thomas Edison and many other great American leaders. Abraham Lincoln, in fact, specified the existence of patents as one of the three leading elements contributing to the expansive growth of the United States during his era. Over the last two centuries, the role of the patent system in terms of spurring innovation in American industry has grown significantly, especially in view of the rapid expansion in technology.

Stertil-Koni is the global market leader in heavy duty hydraulic lifts – bus lifts and truck lifts – and is the preferred supplier to the world’s leading companies in the truck and bus industries. Stertil-Koni's breadth of lift products meets all ranges of lifting needs and includes mobile, two-post, four-post, in-ground lifts, parallelogram lifts, half-scissors and the innovative axle-engaging, in-ground, scissor-style heavy duty hydraulic lift configuration. In the United States, under the leadership of Dr. DellAmore, Stertil-Koni USA, Inc. has achieved double-digit annual sales growth every year since its incorporation in Maryland in 1997. Today, the company is recognized as the leading provider of mobile lifts and the fastest growing heavy-duty lift company in North America. Stertil-Koni U.S.A. is headquartered in Stevensville, Maryland and has a major manufacturing facility in Streator, Illinois.