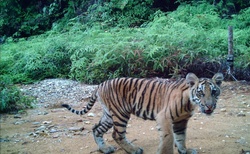 This is exciting news but it is tempered by the threat of their home being rapidly cleared by global paper companies, palm oil plantations, encroachers, and illegal loggers. With all of these threats, these cubs may not survive to adulthood.

Specially designed video cameras installed by WWF researchers caught the mother tiger and her cubs on film as they stopped to sniff and check out the camera trap. As few as 400 Sumatran tigers are left in the wild and they are under relentless pressure from poaching and clearing of their habitat. After five years of studying tigers using wildlife-activated camera traps set up in the forest, these are the first video images of a Sumatran tiger with offspring.

“This is exciting news but it is tempered by the threat of their home being rapidly cleared by global paper companies, palm oil plantations, encroachers, and illegal loggers,” said Barney Long, Senior Program Officer for Asian Species Conservation. “With all of these threats, these cubs may not survive to adulthood.”

The campaign aims to raise the bar for tiger conservation by securing high-level political commitment at a Heads of State Tiger Summit in September in Vladivostok, Russia to be hosted by Prime Minister Vladimir Putin, and supported by WWF and other partners of the Global Tiger Initiative, including the World Bank.

In addition to the footage of tigers and their cubs, the video camera also captured images of a male Sumatran tiger and its prey, wild boar and deer, as well as many other species such as tapirs, macaques, porcupines and civets.

Infrared-triggered camera traps, which are activated upon sensing body heat in their path, have become an important tool to identify which areas of the forest are used by tigers, and to identify individual animals to monitor the population. WWF has operated dozens of cameras throughout the central Sumatran province of Riau.

With this clear scientific evidence of tiger presence, WWF is calling for formal establishment of the area between Rimbang Baling and Bukit Tigapuluh forests as a protected wildlife corridor. WWF is also urging the palm oil and paper companies operating in the area -- including Sinar Mas/APP and APRIL -- to help protect all high conservation value forests under their control as they are the prime habitat of tigers and other endangered species.

The video footage can be previewed at: http://www.worldwildlife.org/jan2010rarefootage .