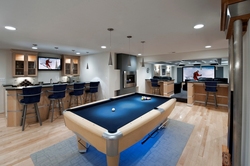 2010 Capital COTY Grand Team Award for Residential Interior $250,000 and Under

During a ceremony at the Westin Alexandria, Synergy Design & Construction, Inc. (dba Synergy Design & Consulting) was awarded the "2010 Capital COTY Grand Team Award for Residential Interior $250,000 and Under" from the National Association of the Remodeling Industry (NARI) Metro DC Chapter. The 2010 Capital COTY awards represent the best of the best in remodeling & design-build.

"We are proud to be honored among the caliber of firms who are members of NARI Metro DC Chapter," said Mina Fies, President & CEO of Synergy D&C. "Winning this prestigious award on the heels of being the Silver Winner of the Master Design 2010 Award in the Finished Basement category by Qualified Remodeler makes this a very exciting time in our business."

The winning project is a contemporary basement that incorporates the homeowners' many interests while making sure it stands out from the rest of the neighborhood. The homeowners wanted the full theater experience, but they were concerned about taking up too much space for one area and therefore making the basement feel small and choppy.

"We asked Mina and her team to come up with a contemporary design that would create a real "Wow" factor for everyone who enters the basement" said the homeowner, who owns the award-winning home with his wife. "The design that Synergy came up with accomplished that in spades. From the overall layout, to the architectural details, to the products recommended for that extra special look, everything was perfect."

"We chose to create a theater that was open to the rest of the living space, which kept the overall feel open and spacious and provided maximum viewing throughout the entertaining areas," said Fies. "The bar area was placed in a convenient corner near the outside entrance and contemporary elements were added throughout to include a wall mounted gas fireplace, unique water feature, light wood wall skims and metal accent strips that complemented the overall modern décor."

Synergy D&C is an award-winning woman-owned, Class A General Contractor in Virginia and the District of Columbia whose mission is to provide great design and construction using their proprietary Renovation Road Map™. The company helps clients not only understand the design, but plan for the exact costs, timelines, and schedules, which eliminates unexpected bills and frustration. Synergy D&C launched on September 19, 2008 as a design and remodeling business and has represented construction costs valued at over $4 million. More information can be found at http://www.SynergyDandC.com.