The Syrian Expatriates Organization strongly condemns the bombing of the Turkish border city Reyhanli and stands with the Turkish government in solely placing blame on the Assad regime. 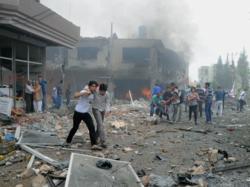 The Syrian Expatriates Organization strongly condemns the bombing of the Turkish border city Reyhanli and stands with the Turkish government in solely placing blame on the Assad regime. According to CNN,in an article published on May 11th-2013, two explosions ripped through the Turkish border town of Reyhanli killing at least 40 people and injuring hundreds. Syrians and Turks alike were among the dead and wounded.
http://www.cnn.com/2013/05/11/world/meast/turkey-syria-violence/index.html?hpt=hp_t2

SEO spokesperson Dr. Waleed Brinjkji, stated “This attack shows just how arrogant Assad has become in the face of the international community’s silence. First he fires chemical weapons on his people and gets little more than some international condemnation. Now he orchestrates terrorist attacks on NATO members knowing full well that the international community’s response to these attacks will be tepid at best.” Dr. Brinjikji added “Assad has proven to the international community no matter where Syrians may flee, they will always be within reach of his brutality, whether it is in Turkey, Lebanon, Jordan, or Iraq. He has also proven that anyone who is willing to help the Syrian people is also fair game for his death squads. Furthermore, by committing this atrocity in Reyhanli, Assad is trying to sow discord between the people of Turkey and the Syrian refugee community.”

The SEO is extremely grateful and impressed by the willingness and effort put forth by the Turkish government and the Turkish people in providing humanitarian aid, employment and education to the Syrian refugee community. The SEO stands with both the Syrian and Turkish people in condemning this atrocity and calls on the international community to intervene as quickly as possible so as to prevent Assad from devastating more cities across the Middle East and the world. The SEO and its affiliated organization UOSSM are working to address any relief efforts in the aftermath of this bombing.