The UOSSM Issues an Urgent Plea to the International Medical Organizations, to Provide Immediate Medical Aid in the Besieged City of alQusair

UOSSM Expresses deep concerns about the medical and humanitarian situation of the city of alQusair, after a report by Alarabiya news in an article published on May 30th -2013 stated that, “the Syrian rebels in the city pleaded for medical aid.” 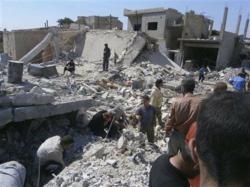 Medical and humanitarian situation in Qusair is rapidly deteriorating

UOSSM Expresses deep concerns about the medical and humanitarian situation of the city of alQusayer, after a report by Alarabiya news in an article published on May 30th -2013 stated that, “the Syrian rebels in the city pleaded for medical aid” and saying that,“ they were unable to evacuate hundreds of wounded under an onslaught from government forces backed by Lebanese Hezbollah fighters.” Malek Ammar, an opposition activist in the besieged town, said in the same article that, “We have 700 people wounded in Qusair and 100 of them are being given oxygen. The town is surrounded and there's no way to bring in medical aid.”

Dr Tawfik Chamaa, UOSSM spokesperson, said; “the situation in alQusair is rapidly spiraling out of local field health center capacities. We are receiving pleas from local doctors in alQusair, pleading for help to evacuate the wounded, provide oxygen and ventilators, and provide medications and gauze.” Dr Chamaa added, “at the present time, there are more than 30,000 civilians in alQusair, this is in addition to the displaced people from the surrounding villages. The medical and humanitarian resources are exhausted due to the long tight siege on the city. It is absolutely imperative that international medical and humanitarian organizations have an access inside alQusair immediately, to ensure safe transfer of relief supplies through creation of humanitarian corridors.”

The UOSSM is coalition of humanitarian, non-governmental, and independent organizations, created following the deadly events in Syria, to provide medical and humanitarian aid to Syrians. UOSSM was established by 14 medical and relief organizations, and includes hundreds of physicians of mainly Syrian origins distributed in the United States, Canada, in Europe and in different Arab countries.