The UOSSM Pleads for Urgent Evacuation of Wounded From alQusair and Creation of Safe Humanitarian Corridors.

UOSSM urges the UN and the international humanitarian organizations for urgent ceasefire, to help evacuate the wounded in the embattled city of alQusair, and to allow food and medicine in the city. 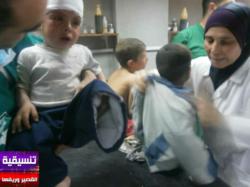 Doctors in alQusair pleading for ceasefire to evacuate the wounded

UOSSM urges the UN and the international humanitarian organizations for an urgent ceasefire, to evacuate the wounded in the embattled city of alQusair, and allow food and medicine in the city, according to the ABC news, in a report published on June 3rd-2013, stated that, “ At least 300 seriously wounded residents of an embattled Syrian town near the border with Lebanon need to be evacuated for medical treatment,” said Dr Kasem AlZein, coordinator of the treatment in several makeshift hospitals in Qusair, and added, “the wounded are being treated in private homes after the town's main hospital was destroyed.” Dr Alzein pleaded for help, saying, “We are treating people in homes in an unsterilized environment. We tried to evacuate the wounded and we can't. No one is helping us”
http://abcnews.go.com/International/wireStory/hezbollah-syrian-rebels-worst-clash-lebanon-19309237#.UazFCpxNi60

According to the same report by the ABC news, the evacuation efforts by local medical teams had failed after a convoy was attacked last week. This is in addition to running out of medical supplies and oxygen.

Dr Tawfik Chamma, the UOSSM spokesperson, said, "The humanitarian situation in alQusair is rapidly deteriorating, demands immediate action by the international community. We reiterate DR Kasem alZein calling for immediate help to evacuate the wounded, the civilians, and to allow food and medical supplies inside the besieged city.” Providing more details on the situation in alQusair, Dr Chamaa said, “There are more than 30,000 civilians trapped in the city, and more than 1500 wounded. We are receiving daily calls from people trapped inside stating the lack of basic needs, no food or medicine. It is imperative that the international community fulfills its obligation in protecting civilians and wounded in the time of war, and acts urgently to ensure safe humanitarian corridors to the city.”